Your Smartphone Could Replace Your Driver’s License Someday Soon

Is this heaven? No, it's Iowa. 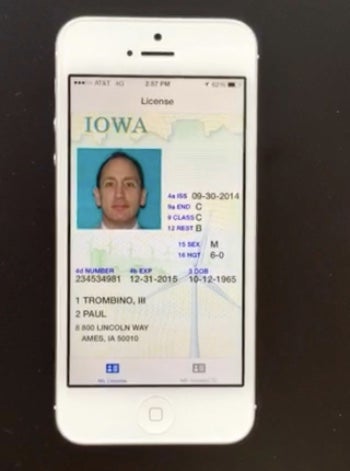 We’ve all probably left the house and hopped in a car before realizing that we left our wallet at home, though most of us have probably been lucky enough not to then be pulled over. But you may soon be able to produce your smartphone when you’re asked for your driver’s license—at least, if you live in Iowa.

According to the Des Moines Register, the state’s Department of Transportation is aiming to next year provide a free app that will store your license, for use in traffic stops and any place else you’re asked to provide your ID—even when boarding a plane at an Iowa airport. Such a venture would make Iowa the first state in the U.S. to provide digital identification documents. Iowa is one of several that states already allow for proof of insurance to be displayed on an electronic device.

As someone who’d love to be able to get his library card and gym membership card on his smartphone, digitizing my driver’s license seems like a dream. Right now, if I leave my house without my wallet, I can use my phone to pay for things—assuming I go to a retail location that supports Apple Pay—but I still can’t leave my wallet at home on purpose. Having digital access to my ID, and to other important documents, would go a long way toward eliminating the old-fashioned wallet.

Of course, there are a number of challenges that have to be overcome. The most important of those is security. Iowa’s app will, apparently, be protected by a PIN, but it would certainly be more secure if it allowed for biometric verification or two-factor authentication. Some sort of cryptographic verification—probably via a barcode—would also be key, because it’s a lot easier to Photoshop a fake license and display it on a smartphone than to create a physical fake ID. And none of that even gets into other logistical issues, such as legal ones.

And then there’s the most basic of issues: power. After all, your good old plastic driver’s license never runs out of juice. So while your smartphone may not yet be ready to out-and-out replace your wallet, it’s getting closer to the point where you may just be able to get by if you accidentally leave it at home.