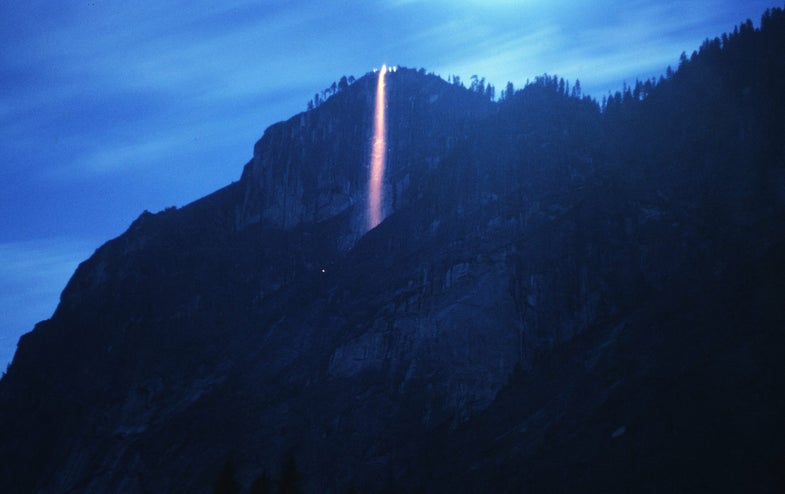 There’s something magical about nature coming together to create a spectacle like Yosemite’s firefall. It only happens in mid- to late February, when the skies are clear, the snow is melted, and the proverbial stars align. But just a few years before the firefall became a well-known visual phenomenon, visitors were treated a different firefall every single night—one made of actual fire.

The modern firefall happens on the eastern side of El Capitan, the massive rock formation that juts out into Yosemite Valley. Snowpack from higher mountains melts and flows down towards El Capitan, forming the 1,000-foot Horsetail Fall from December through April—provided the daytime temperature is high enough to melt some snow. During the day, it’s not all that impressive. Many of the other falls that flow into the valley are far more awe-inspiring.

But for a few weeks in February, the light hits the waterfall at just the right angle to light it up with brilliant reds and oranges, making it look like the water is aflame. No one really talked about the natural firefall until the early ’70s, though, when a photographer named Galen Rowell noticed the illusion. Before that, they were too busy pushing actual fire off of a cliff a little farther down the Valley to notice.

For a park that’s known today for its pristine beauty, this all sounds absolutely insane. Modern campers have to attend to their fires constantly and put them out with water to kill any smoldering embers. You also can’t gather firewood in the Valley (to preserve the natural ecology) or bring in firewood from more than 50 miles away (to prevent bugs that live in the wood from spreading around the park). You have to buy your firewood at nearby supply stores and put out the flames by 10pm during the busy season.

Back in 1871, none of those regulations existed. Yosemite wasn’t even a national park yet—it was reserved land managed by the state of California, and parts of it were owned by individuals like James McCauley. He owned the Glacier Point Hotel, which sat atop the 3,214-foot cliff that overlooks Yosemite Valley. Guests at the hotel got to enjoy a nightly campfire with a spectacular view, and at the end of the evening McCauley would put out the fire by stomping the embers with his foot, then kicking them over the edge.

From Glacier Point, it would have just looked like a bunch of glowing lumps falling away. But from the valley below, it was much more impressive. McCauley got evicted in 1897 and the spectacle stopped for a few years—until a man named David Curry founded a camp at the base of the point. He’d heard about the firefall and revived it as a way to attract tourists. By 1900 they were building huge fires for special events, which eventually evolved into a nightly ritual. They even had a whole hokey call-and-response drill that ended when Curry would call out “Let the fire fall!”

When the National Park Service was created in 1916, though, Yosemite fell under their care. And shockingly, they weren’t such big fans of the event. Yosemite was supposed to be a haven for people to commune with nature, and this David Curry character was drawing massive crowds each night solely to witness an unnatural occurrence. They were trampling campgrounds and causing traffic jams throughout this pristine beauty. Not to mention the fact that Yosemite is full of very flammable trees and Curry was literally playing with fire. The NPS tried to kill the event multiple times, including during World War II (when it had to stop for a few years), but it was so popular that they were forced to bring it back. The firefall continued mostly uninterrupted until 1968, when the director of the NPS finally outlawed it. The last ceremony took place on January 25th with hardly anyone around to watch.

Anyone who’s been to Yosemite in the busy spring and summer seasons can tell you that there are still traffic jams in the valley. The roads are small, there are virtually no traffic lights, and no one is exactly in a hurry. Thanks to the NPS, the vast majority of the nearly 1,200 square miles are still beautifully preserved. And today’s firefall may not be as impressive, but at least we’re not risking forest fires every time it happens. We can appreciate it more for the fact that it only exists for a few fleeting moments each year.