The Year In Plagues: Ebola, The Invasive Species Of Florida, And More

As 2014 comes to an end, let’s take a look at the year’s biggest outbreaks, pathogens, and technofix dramas. Ebola... 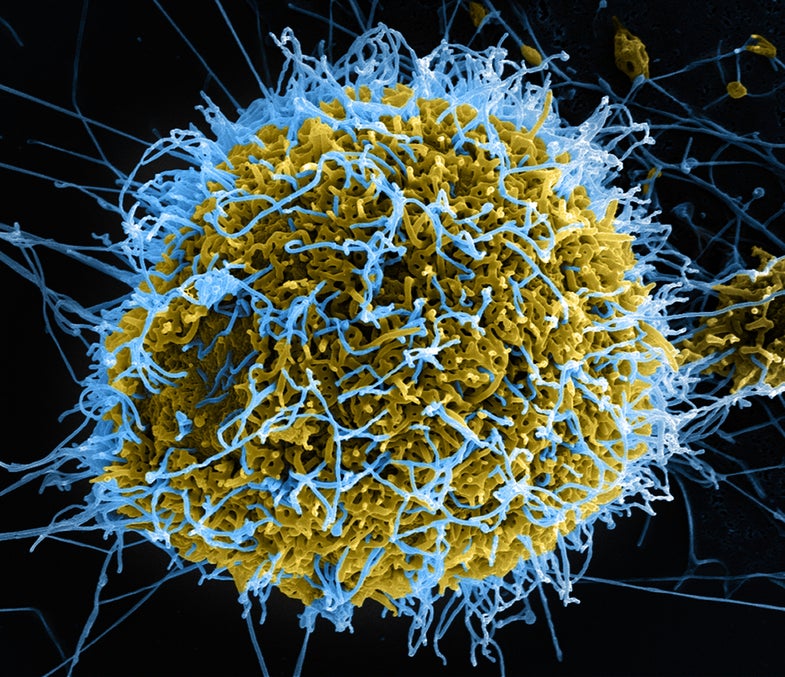 As 2014 comes to an end, let’s take a look at the year’s biggest outbreaks, pathogens, and technofix dramas.

Ebola was arguably the biggest story of the year. Some of the best coverage, in my opinion, included this epic Washington Post story exploring why the outbreak grew so out of control; Richard Preston’s New Yorker story on Ebola and genomics; infographics from the New York Times and Vox; and general coverage at Nature, particularly by Erika Check Hayden. Time magazine named the healthcare workers who are fighting the outbreak as their annual Person of the Year.

Ebola news eventually overshadowed stories of several other outbreaks. Remember Middle East Respiratory Syndrome (MERS)? This virus has circulated in Saudi Arabia since 2012, but news coverage shot up this year when we saw the first case in the US (similar to the sharp increase in Ebola coverage after it breached American borders). In May, Cynthia Gorney published a feature at National Geographic explaining how the virus spread from patient zero and beyond. And do you remember chikungunya? This incurable—though not usually fatal—mosquito-borne illness appeared in the Caribbean for the first time, as well as in the US. Here is Maggie Koerth-Baker writing on the topic at BoingBoing (not long after Koerth-Baker’s piece published, chikungunya showed up in Florida). And finally, how about enterovirus? This respiratory illness has spread across the US for the past several months, mostly infecting children. Kids with asthma and other preexisting lung problems are especially vulnerable, and many have died, while others have suffered temporary paralysis. Here is an episode of NPR’s All Thing Considered exploring why the virus surged this year.

In other microbe news, this year has seen much debate over whether highly deadly pathogens belong in the research lab. There were arguments over “gain of function” influenza research, which involves adding new features to a flu strain, such as giving it the ability to transmit between lab animals. Earlier this year, scientists at the University of Wisconsin published a controversial gain of function paper, and the response wasn’t exactly supportive. Here’s Ian Sample at the Guardian laying out all the ways scientists called the work “crazy” and “dangerous,” and here’s Maryn McKenna at Wired describing another big paper on the topic, which calculates the likelihood that such a virus could escape the lab.

The United States federal government temporarily shut down gain of function work, possibly thanks, in part, to embarrassing snafus at the Centers for Disease Control and Prevention in which researchers mishandled samples of smallpox, anthrax, and a dangerous flu strain. For more on the connection between these events, read this great piece by Helen Branswell at Scientific American. And scientists and policy experts were also locked (still) in a longtime argument over the future of the smallpox virus, which is the first and only human disease we’ve totally eradicated. Neither side of this fight can agree whether the few remaining smallpox lab samples pose a threat and need to be destroyed or are useful for additional research. Read more at Quartz, Nature News, and Slate.

Healthcare workers across the globe have been trying to make two illnesses go the way of smallpox (that is, eradication, not lingering in a lab or a forgotten CDC freezer), and 2014 saw major steps towards that goal. The first is caused by the parasitic guinea worm, mainly endemic in Africa. The New York Times wrote on the history and status of guinea worm eradication, and Debora MacKenzie at New Scientist described how local violence is thwarting the efforts. The other disease that’s nearly wiped out is polio. The good news there is the World Health Organization declared Southeast Asia polio-free in March, and Africa may soon follow.

But polio eradication efforts still face obstacles in Pakistan thanks, in part, to vaccine fear and to the CIA, which once used a fake hepatitis vaccination program as a shield to gather intelligence on Osama bin Laden. NPR posted a lovely and haunting story about healthcare workers—mainly women—who continue to vaccinate children in the face of death threats, and here is an essay at Aeon by an Israeli doctor, who argues that polio efforts are stymied by a global anti-vaccination sentiment.

Speaking of vaccination fear, the CDC reported a sharp rise in measles cases in the US this year. Anti-vax campaigns are partially to blame, although there are also cases of vaccine failure, as explained by Tara Haelle in this nuanced piece at the Washington Post.

And speaking of vaccines, we saw progress on the development of several this year including the first dengue vaccine, which may be available by 2015; the first Ebola vaccines, trials of which are underway, although one was stopped early because four of the 59 patients reported joint pain; and the first chikungunya vaccine, which passed an initial safety test earlier this year.

In the agricultural realm, one of the biggest controversies in 2014 was, unsurprisingly, genetically engineered crops. Regulators in the US approved next-generation herbicide-tolerant GMOs amid skepticism of the older and more toxic chemicals that will be used with the tech. Another controversial topic in agriculture this year is the use of antibiotics in livestock, a practice that is increasingly blamed for our current crisis in antibiotic resistance. The White House announced a plan to help curb resistance, which focuses on better drug stewardship and new drug development, but critics wonder why the plan does not cover agricultural use. Here’s Susan Cosier making that point at OnEarth.

The antibiotics crisis has spurred researchers to look for different ways to kill pathogenic bacteria, from old techniques such as phage therapy and antibodies to newer approaches, such as mining our own microbiome and genome editing. And by the way, the new genome editing techniques—the most popular is called CRISPR—will have far-reaching implications not only for medicine, but also agriculture, ecology, and more. Here’s a NOVA Next piece by Tim De Chant and Eleanor Nelsen explaining some of the tech’s possible implications.

And finally, the most popular location for invasive species stories in 2014, at least from my count, was Florida, from its lionfish to its tegu lizards. David A. Steen had a great story at Slate explaining why the Sunshine State is so prone to invasive animals, particularly reptiles. And a new study on invasives came out this year, too, suggesting that these species are so successful because their native habitats include such high diversity of other plants and animal. They evolved amidst a lot of competition, according to the paper, and thus are primed to be successful when introduced to a new environment. For more on that topic, read Carl Zimmer’s great piece at his New York Times column, Matter.