If This Timeline Doesn’t Convince You Climate Change Is Real, Nothing Will

The latest XKCD goes back 20,000 years to show just how drastically Earth is warming today 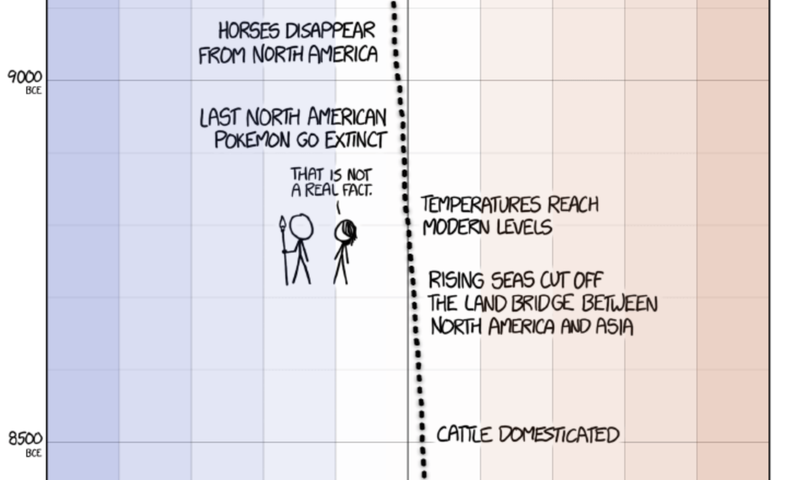 With today’s news that August broke global temperature records, it’s useful to consider how much our world’s climate has changed over the years. A fantastic new timeline created on the web comic xkcd does exactly this.

xkcd is of course the long-running, much-adored ongoing creation of Randall Munroe, an artist, physicist, and former NASA roboticist.

Since 2005, Munroe has used his web comic to illustrate all sorts of scientific and nerdy concepts in really hilarious and insightful ways, from graphs showing which sci-fi futures are still possible, to infographics showing how many model rockets you’d need to get to space, to the “Ballmer Peak” showing the productivity of drunken programming. He even has an asteroid named after him.

In today’s xkcd comic, Munroe tackled human-caused climate change, illustrating how Earth’s average temperature has changed in the last 22,000 years, since the last glaciation — when glaciers were as far south as New York.

Munroe’s comic beautifully illustrates the idea that while climate has changed before, it hasn’t changed so suddenly. Four degrees Celsius warming over 22,000 years due to natural variations like changes in the Earth’s orbit, or changes in the circulation of the oceans is one thing. Warming by two degrees Celsius over 100 years because of excessive greenhouse gas emissions is quite another.

That’s why countries like Brazil, China and the United States are banding together behind the Paris Agreement to push for a sharp reduction in heat-trapping greenhouse gas emissions, which could prevent the world from warming by as much as four degrees Celsius by 2100.

That’s one of the more drastic predictions of climate change models, and could result in a host of very bad things happening to human civilization, including massive sea level rise that would swamp coastal cities.

Scroll through the whole timeline here and on xkcd.