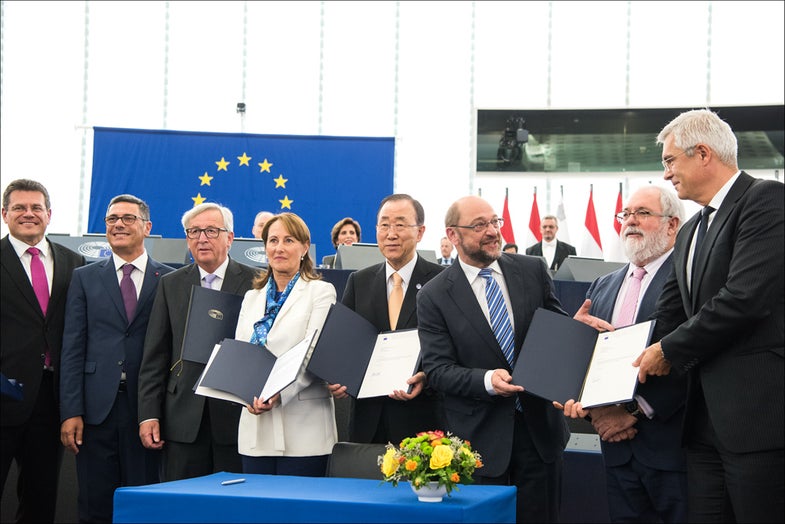 The Paris Agreement is tantalizingly close to becoming a binding international agreement, thanks to a vote by the European Parliament today.

The Paris Agreement, signed earlier this year at the United Nations, seeks to limit global warming to below two degrees Celsius above pre-industrial levels.

The Paris Agreement will only enter into force 30 days after two thresholds are met; at least 55 countries have to ratify or approve the treaty, and the countries that ratify the agreement must represent 55 percent of the world’s greenhouse gas emissions. Before today, 62 countries representing 52.11 percent of greenhouse gasses had ratified the treaty, meeting one threshold, but not the other.

In order to ratify the Paris Agreement, the 28 countries in the European Union need to go through an additional step, ratifying the agreement at the EU, and then ratifying it at a national level. Today’s vote at the European Parliament crossed that first to-do off of its list, opening the door for EU member countries to ratify the agreement. The hope is that within a week, enough European countries will ratify the agreement to push it over the finish line and into force. Seven EU countries (Hungary, France, Slovakia, Austria, Malta, Portugal and Germany) have already finished the national portion of their ratification process, and since those seven countries collectively represent five percent of greenhouse gas emissions, that should be enough to push the agreement into force.

“Our vote paves the way to ensure that the agreement meets the necessary threshold (…) The entry into force of the Paris agreement less than one year after its signature is a massive achievement, given that it took eight years for the Kyoto protocol. Today’s vote also means that the EU remains a climate leader” said European Parliament President Martin Schulz.