Making a sticky situation even stickier 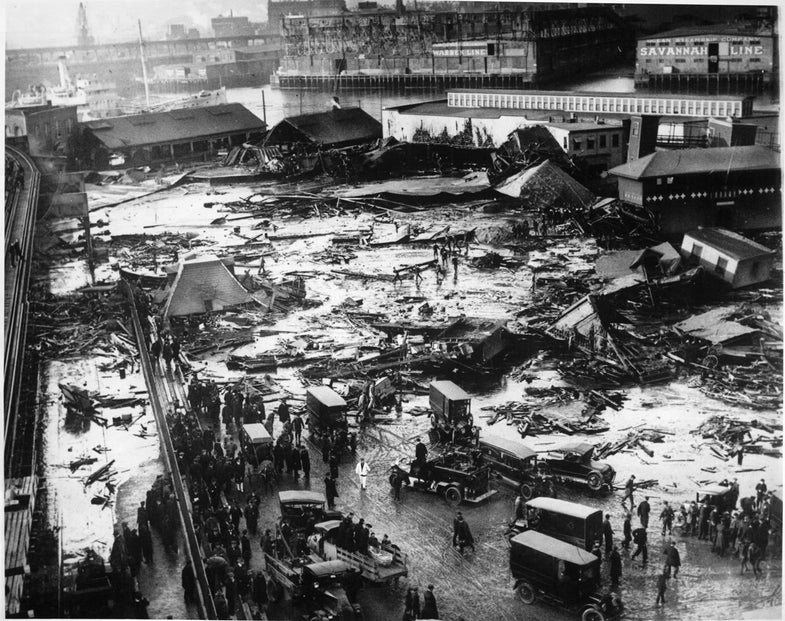 In January of 1919, a tank containing two million gallons of molasses burst open, unleashing a sticky flood onto Boston’s North End. The 25-foot high wave of goo oozed over the streets at 35 miles per hour, crushing buildings in its wake and killing 21 people.

A number of factors are thought to have contributed to the disaster. The steel of the tank, where the Purity Distilling Company was fermenting molasses into alcohol, was only half as thick as it should have been. And that January’s relatively balmy, 40-degree Fahrenheit weather may have increased pressure as carbon dioxide built up inside. Now, research by Harvard fluid dynamicists suggests cold temperatures also added to the deadly mix.

Before the rupture, the molasses inside the tank was likely 5 degrees Celsius warmer than the surrounding air, thanks to a fresh shipment of syrup from the Caribbean. The higher temperature may have helped the molasses spread over the Boston waterfront at such an alarming pace. But once exposed to the nearly freezing winter temperatures outside, the goo cooled and became much thicker and stickier. The higher viscosity may have trapped people caught in the flow, and likely hampered rescue and cleanup efforts, according to the researchers.

Researchers gained new insight into the disaster by studying historical accounts of the accident, century-old maps, and weather data. The researchers also built their own mini molasses flood inside a walk-in refrigerator. Using corn syrup as a stand-in for molasses at this smaller scale, they studied the goop’s flow properties at wintery temperatures.