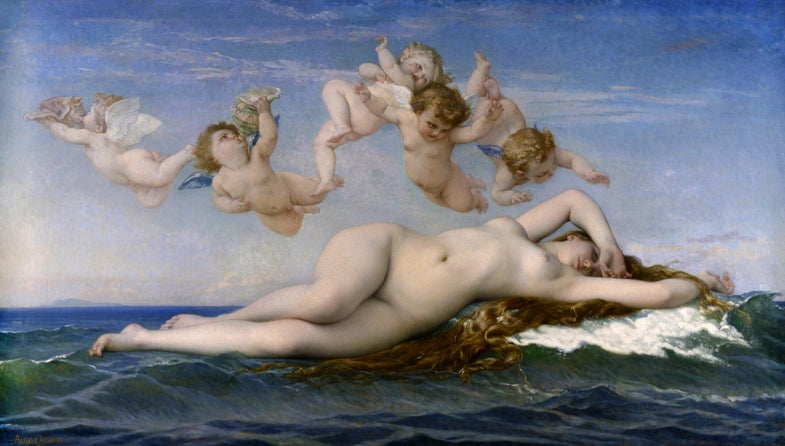 This post has been updated. It was originally published on January 12, 2018.

We’re a little obsessive about how we measure body fat and try to move it around. And no, we’re not talking about stealing bags of liposuction leftovers to make soap.

As a society, we seem perpetually unhappy with wherever our body chooses to store its fat cells. Pop music keeps telling us we should exercise enough to get “little in the middle” while maintaining, as they say, “much back.” Countless workouts and fad diets promise to target only “problem areas.” And then there are the more drastic means of fat reallocation: The Kardashians move it from their stomachs to their butts, while others take it from their thighs and stick it in their breasts. They turn to these surgeries because nature is just too good at stashing away our excess energy in the form of flab.

And it’s hard to fight nature.

If you tend to pack the pounds on your tummy or your butt or your upper arms, you’ll continue to tend to put fat there. Forever. Sit-ups and squats can help shape our bodies differently, but no amount of diet or exercise will turn you into a person who naturally stores lipids in a different place. In fact, there’s really only one way to do it: change your hormones.

Specifically, your sex hormones. Testosterone and estrogen are two of the biggest drivers of fat storage—they’re the whole reason that men and women tend to have different body shapes when it comes to chub. Biologically female bodies stash the stuff in thighs and butts, whereas male bodies tend to pack pounds onto the stomach. This is also partly why men tend to have more cardiovascular problems. Abdominal fat exacerbates metabolic issues and triggers all kinds of metabolic changes that have a negative impact on your cardiovascular system.

[Related: Why is it more dangerous to have belly fat?]

But it’s not as straightforward as “testosterone makes you put fat in your belly.” In fact, it’s men with low testosterone who start storing lipids there, which is why, as they age and their natural testosterone levels decrease, they generally start getting that potbelly look.

Both testosterone and estrogen actually promote leanness overall, and androgens (that’s the class of sex steroids including testosterone) seem to have very different effects depending on sex. It’s a complex system, and is made only more complicated by the fact that it’s very hard to study differences like this—the majority of people in the world remain either biologically male or biologically female for their entire lives. This means there are only a few windows where we can see how a significant change in sex hormones impacts body fat.

The most obvious is puberty. As teenagers’ hormones kick into high gear, they undergo all kinds of bodily changes because testosterone and estrogen (and, to a lesser degree, progesterone) are responsible for a lot of our secondary sex characteristics. Women develop wider hips and breasts. Men can suddenly put on muscle, especially in their chests, and their voices deepen as their testicles mature. Everyone starts growing body hair and experiences confusing new feelings of lust and romance that inevitably lead to some heartbreak.

And during this time, we also start to develop body fat in those characteristic places: men in the stomach, women in the thighs and butt. This is because adipose tissue in different parts of our bodies have receptors for different kinds of hormones. The fat in our stomachs, especially that visceral fat that surrounds our organs, seems to respond well to androgens (i.e. testosterone), and researchers think that’s because visceral fat cells have androgen receptors. Subcutaneous fat, which is the stuff you develop just under the skin, has estrogen receptors.

As a fun bonus, subcutaneous fat also produces and stores estrogen, so the more fat you have, the higher your overall estrogen levels tend to be. This is part of why people with very low body fat percentages can stop menstruating—without enough estrogen around to control things, their hormonal cycles get screwed up.

This might be part of why women start having a higher body fat percentage when they hit puberty: More estrogen prompts the growth of more fat cells.

The same thing seems to happen in transgender people who undergo hormone therapy to assist their transition. Those assigned female at birth who begin taking testosterone also switch to growing visceral fat in their abdomens, rather than subcutaneous fat in their thighs and bums. They even develop a higher risk of heart disease, since that adipose tissue is what strains their metabolic systems. People assigned male at birth who take estrogen therapy have the opposite experience. It’s from these studies that we get a lot of our best information about how sex steroids influence body fat, since it’s the only time that people actually switch their prevailing hormones rather than ramping the levels of their innate hormones up or down.

As we age, though, we do undergo a slower transition from high to low hormone levels. Men have lower amounts of testosterone as they age, and since testosterone promotes leanness and abdominal fat, this lessening seems to have the overall effect of adding a potbelly. But confusingly, drugs that artificially bring down testosterone (like the androgen-blocking meds that some men with prostate cancer get) tend to shift body fat away from the stomach and towards a more feminine distribution.

[Related: How to get a six-pack (or even an eight-pack)]

Oddly, it’s also true that having too much testosterone makes you more likely to have belly fat. There’s a kind of perfect zone where most men fall for most of their lives, but going too far outside it in either direction causes many of the same metabolic symptoms. Men with hypogonadism, who have too-low testosterone, slim down when given supplements. But male athletes who abuse those same supplements increase their risk of heart disease and have a higher tendency to accumulate fat in their stomachs (it’s just not apparent because most of them are fit).

Menopause causes a much more drastic drop. As estrogen levels plummet, women get to experience puberty in reverse as their bodies adjust to a new balance of hormones. There’s a whole host of symptoms that come along with this transition, among them a shift to storing fat in the stomach and an overall tendency to gain weight in the first place. This is why postmenopausal people have more of what we call an apple shape than a pear—fat moves to the abdomen. Interestingly, those who get hormone therapy to ease symptoms also tend to delay the body-fat shift. Cardiovascular disease risk also increases around this time. It may be that the drop in estrogen allows natural androgen levels to have a larger impact on the body.

But it doesn’t necessarily take a genetic abnormality, disease, or transition to shift hormone levels. Some women simply have higher testosterone, and some men have a naturally lower level. There’s a huge, totally normal range that can affect your fat distribution, at least to some degree, which is part of why you can’t pick where you store lipids. You’re stuck with what you’ve got, barring surgery or hormone therapy, so learn to accept your flab now. You can lose weight for your health or for your self-esteem, but you’re never going to make your body stop giving you those cute love handles. They’ll be with you through thick and thin, so you might as well learn to love them back.