Why Are Scientists SO Excited About This New Cancer Drug? 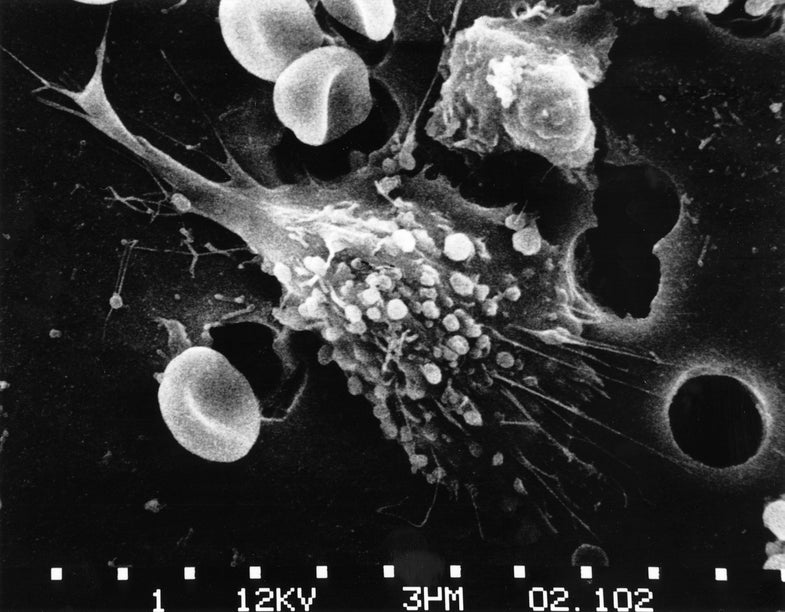 Every year, more than 14,000 Americans are diagnosed with chronic lymphocytic leukemia (CLL), a cancer that starts in the bone marrow and creates a lot of white blood cells that stick around in the body too long. It often doesn’t respond well to conventional treatments like chemotherapy and radiation, and the prognosis can be bleak for patients once this first line of treatment has been exhausted. But a new drug called Venetoclax seems like a promising candidate to change that.

In its first phase of a clinical trial, nearly 80 percent of patients responded to the drug (doctors detected fewer leukemic cells than before), and 20 percent went into complete remission, according to a study published last week in the New England Journal of Medicine. Those results are even more impressive because cancers are much harder to treat after the first round of treatments has failed.

Venetoclax works by targeting a protein called BCL-2, which in healthy people, helps regulate when cells should die. In CLL patients, though, a mutated gene generates a different form of the protein, causing cells to stick around longer than they should in the blood, getting in the way of the body’s typical functions. Venetoclax doesn’t kill the cancerous white blood cells; instead, it stops them from producing BCL-2, enabling them to die as they usually would, as Forbes writes.

Venetoclax is the most recent of a number of drugs that might offer promising treatments for CLL. And it’s not the first to treat conditions with small molecules, either. But it’s making scientists excited because it’s so far proven to be the most effective, having shown such amazing results in clinical trials. “This is a powerful drug. It’s like we’ve got a tiger by the tail,” Andrew Schorr, the founder of two patient advocacy non-profits, told Forbes. “This is more like a knock-out punch to the tumor.”

The drug worked best in patients with a mutation that makes CLL resistant to most other types of treatment, which would make Venetoclax particularly useful in the growing field of precision medicine.

But it’s not on the market quite yet; Venetoclax needs to go through several more rounds of clinical trials, and researchers need to figure out the right dose of the potent drug (several patients in the last trial showed signs of tumor lysis syndrome, which results from a chemical imbalance in the blood if too many tumor cells die in a short period). If it does receive FDA approval, it could be used to treat other conditions caused by a mutation in the BCL-2 gene, including several other types of leukemia or cancers of the skin, breast, prostate, or lungs.

Further research into inhibiting or increasing BCL-2 may also reveal new ways to treat schizophrenia or autoimmune or degenerative diseases in which cells die too quickly.