Where, When, And How To Watch The Perseid Meteor Shower In 2015

Eyes on the skies 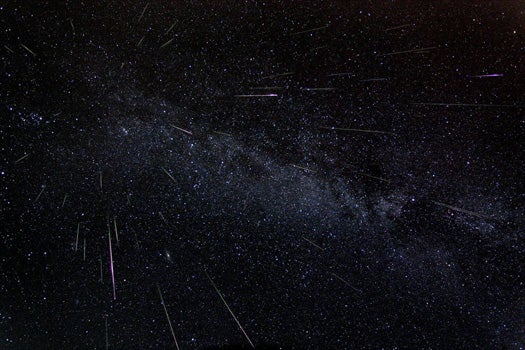 Early tomorrow morning is one of the most astronomically special times in years for us inhabitants of Earth’s Northern Hemisphere. The annual Perseid Meteor Shower is reaching its peak, and the best time to see up to 100 meteors streak through the sky every hour will be starting around 4 a.m. Eastern (1 a.m. Pacific) on August 13th, according to NASA. And because the Perseids’ peak coincides with a new moon this year, the sky itself will serve as a darker — and better — backdrop upon which to gaze at the tiny bits of comet burning up as they enter Earth’s atmosphere.

For those hoping to catch the sight in person, the space agency recommends heading out to areas away from city lights and giving yourself at least 30 minutes for your eyes to adjust to the darkness. As far as where to look, NASA notes the meteors will appear to be flying from all directions, though the meteor shower’s name gives the best clue of where to direct your gaze. The Perseids are named after the constellation Perseus, which is where they appear to radiate outward from (map here). In reality, the Perseids are actually small debris from the comet Swift-Tuttle, a 16-mile-wide hunk of rock and ice that is zipping around the solar system at a rate of 133 Earth years-per-orbit.

For those of us who are stuck in a city, or in the Southern Hemisphere, have no fear! Thanks to the wonders of the internet, NASA will be livestreaming the Perseids live on NASA TV beginning at 10 p.m. EST tonight, August 12.

NASA is offering additional viewing tips on Facebook. To snap a good photo of the meteors, follow this handy guide.

And, if you have time and $35-worth of spare radio equipment handy, you can also make a simple receiver for listening to the sound of the meteors as they shower down.