Where To Watch Apple’s Fall 2015 Event

Hey Siri, Give Us A Livestream 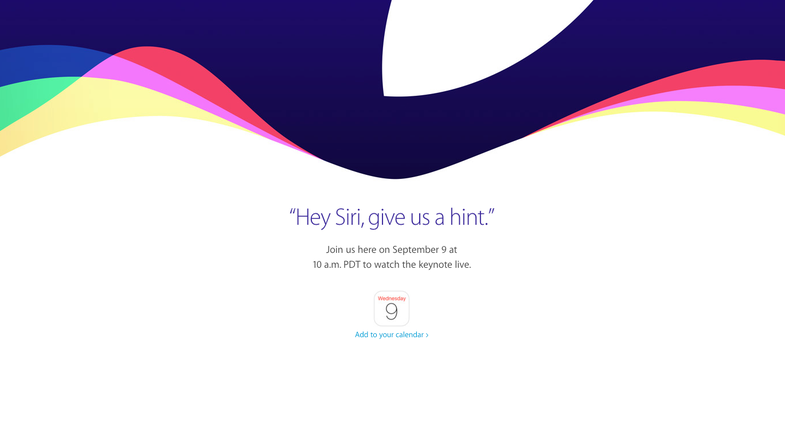 Like clockwork, Apple’s fall event is upon us once again. Similar to last year on the exact same day, Apple will showcase new products on September 9 at 10 am PDT/1 pm EDT. The company has kept quiet about specific announcements, as it usually does, but by now we know what to expect. The iPhone 6S, new Apple TV, and possibly even iPad Pro are all slated to be unveiled in San Francisco on Wednesday. Here’s where you can watch all the company has to announce.

As mentioned before, video of the event will go live on September 9 at 10 am PDT/1 pm EDT.

Those hoping to watch the official Apple fall event livestream will have to do so on an Apple product. The company’s primary stream can be found here and is only accessible on iOS 7 or higher, Mac OS X 10.8.5 or higher, or Apple TV running software 6.2 or higher.

Keeping with the theme of iProducts, the stream will only work in Safari web browsers on your iPhone, iPad or Mac.

Unless you use Windows 10. For the first time, “PC” users can access the official Apple event stream too. Those on Windows machines will need to be running Windows 10 using the new Edge browser.

If You Use Android

But all is not lost if you haven’t chosen to buy into Apple’s ecosystem. While Cupertino may prefer you use one of their creations to see them announce their products for 2015, there’s always a workaround. Savvy Android users have used VLC to view the event in past years. By tapping Media and Open Network Stream, users are able to input Apple’s stream and watch the event. We’ll update this post when Apple makes the link available.

What Will Apple Bring Users?

If tradition holds, Cupertino could bring buyers an updated version of last year’s iPhone 6 device, with a new processor, camera, and the company’s Force Touch feature. Going off of the invitation’s Siri hint we could see the iOS 9 Proactive Assistant features fleshed out, as well Siri for Apple TV. The new set-top box could enable users to control their viewing experience by voice, or even send texts and set reminders via their TV. Other rumors include a possible iPad Pro, and the unveiling of their Apple Music Android app. We’ll be covering all the action tomorrow here on Popular Science, so be sure to check back.