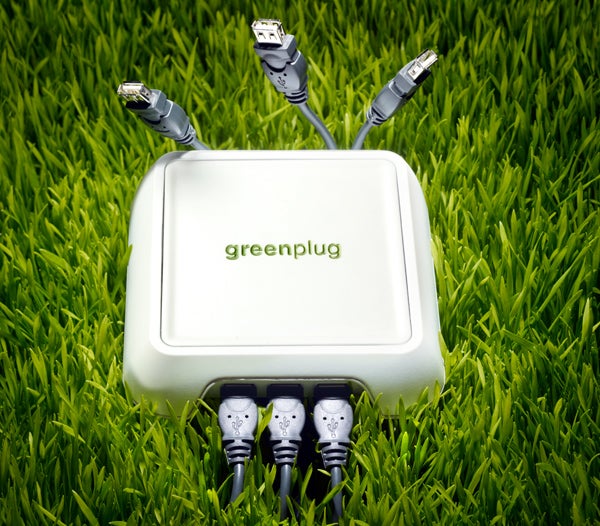 A new type of charger called the Green Plug aims to replace the pile of power bricks under your desk with a hub that powers multiple devices at once, but only when they need it. The idea behind the system, due out early next year, is that software in gadgets would let them tell the hub exactly how much power they need. When its battery is full, the device tells the Green Plug to cut the juice. Current chargers keep drawing a small amount of power as long as they’re plugged into an outlet. (This overcharging also reduces battery life.) The company estimates that large homes could save up to $30 a year by replacing their standard chargers with smart hubs.

The Green Plug uses the USB ports common on small gadgets such as MP3 players. For bigger items, like laptops, it has proposed a modified USB connection with extra wires that delivers more power. The company says it has signed on manufacturers that, early next year, will sell gadgets such as monitors and digital picture frames with traditional chargers and the Green Plug software. A five-port charging hub will sell for about $100, with possible rebates from utilities.

_For more ways to green your office, launch our gallery here._