Not All Big Snowstorms Are Blizzards, But This One Is

It's all about that wind 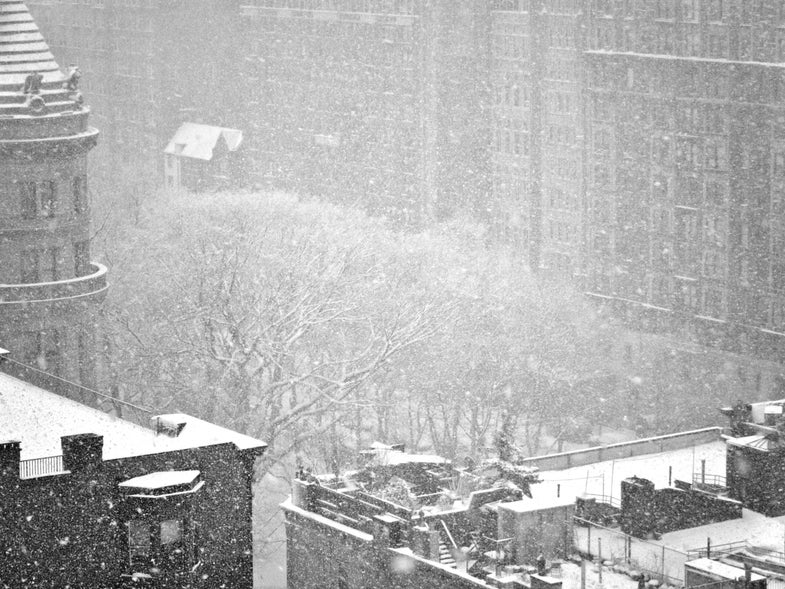 Twenty-nine million people in the northeastern United States are currently under a blizzard warning. That means 29 million people are being warned off the roads, desperately crowding grocery stores to buy bread and milk, and preparing for the inevitable arguments that will arise when the entire family is trapped together in the house for days at a time.

So what is this blizzard thing that has everyone in a panic? It’s not just a big snowstorm, and it has nothing to do with the amount of snow that falls. A blizzard, according to the National Weather Service, occurs when there is “Sustained wind or frequent gusts to 35 miles an hour or greater; and Considerable falling and/or blowing snow (i.e., reducing visibility frequently to less than a 1/4 mile)” for 3 hours or longer. That means a storm that dumps a bunch of snow, but doesn’t have the high winds wouldn’t be a blizzard. On the other hand, particularly windy weather conditions that blew around previously fallen snow could be classified as a blizzard even if little to no new snow actually falls. The latter condition is called a ground blizzard and it happens often enough that the National Weather Service issues warnings about them.

Knowing how little snow we’ve gotten in recent months (last December was officially the warmest since 1880) this storm system is graciously bringing its own snow to the party, with “very impressive snowfall totals of 1 to 3 feet” predicted for New York and New England by the time the storm moves out of the way on Wednesday.

The National Weather Service says that the term blizzard was first used by a newspaper in Iowa in 1870 to describe a storm that blew through the area. Before that, apparently, blizzard was used to refer to “a cannon shot or a volley of musket fire.” The term caught on within a decade, and became widespread soon afterwards.