What I learned from getting covered in whale snot

Scientists can learn a lot from the substances in whale blow. To collect that spray, one research developed a special tool: a drone dubbed SnotBot. 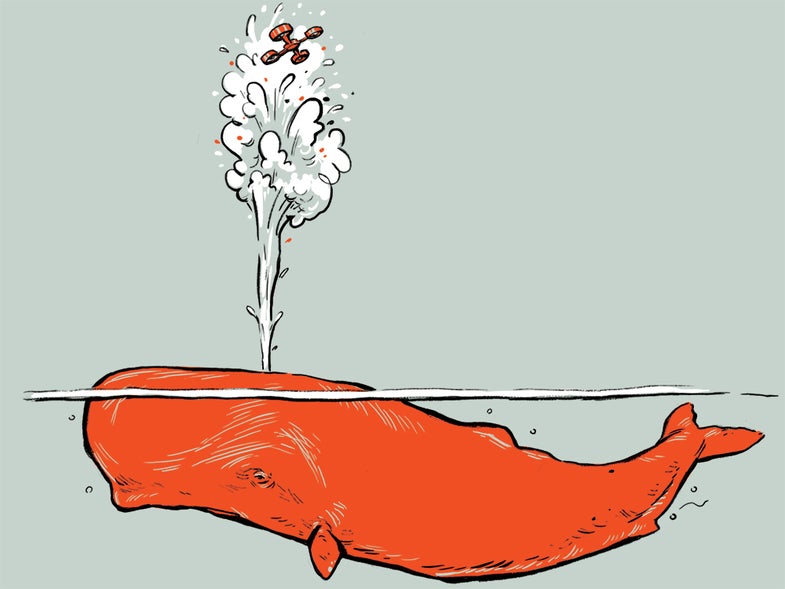 Ocean pollution, habitat loss, and collisions with ships have helped land sperm whales on the vulnerable species list. For biologists like me to track their migration and monitor their stress levels, we take samples of their blubber, which contains DNA and hormones—microscopic markers of an animal’s health. To collect the blubber, we stand on a ship’s bow and fire modified crossbow darts. The hollow projectiles hit the mammal and pop back out with a pencil-eraser-size sample.

In 2010, I was chasing whales in the Gulf of Mexico. To land a shot, you have to get within 30 or 40 feet. One day, after more than four near misses, we spotted a big animal just as the sun was going down. As we got close, its blowhole, which is akin to a nostril, sprayed all over us—and then the animal dived before we could get a sample. Enveloped in this cloud of stinky, horrible whale snot, I thought: Anything this stinky and horrible has to be productive. It turns out whale blow has some of the same molecules that flesh does. I began thinking about how to collect snot.

The solution came from my hobby: drones. We could fly one right through a cloud of whale blow. So in 2012, we started developing a drone outfitted with petri dishes. Now, I can fly SnotBot to a whale more than a mile away to grab a sample.