What Happens After You Land A Rocket On A Drone Ship? 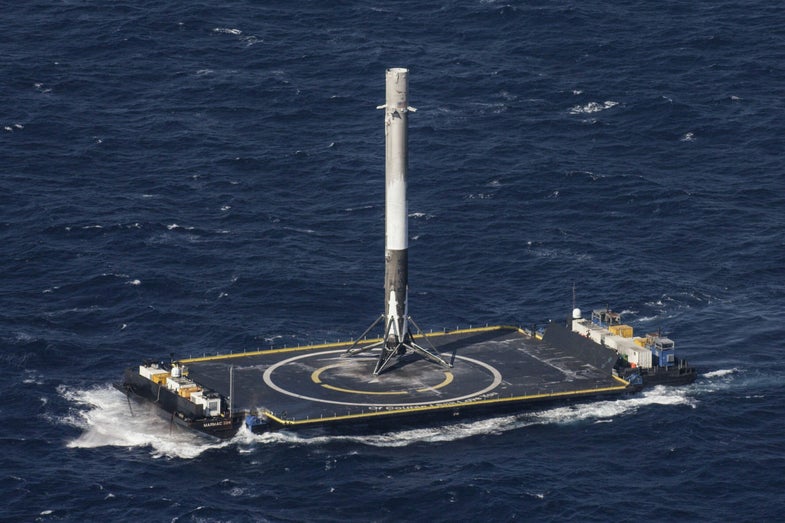 SpaceX finally did it—they landed a rocket on a drone ship in the ocean. The achievement will make it easier for the company to refurbish and re-fly used rockets, potentially cutting launch costs dramatically. The success was a long time coming, and the company had to suffer through several fiery failures before they could pull it off.

“We’re a little bit like the dog that caught the bus,” Musk joked during a press conference yesterday. “’What do we do now?’”

Thankfully, the next part isn’t nearly as complicated as rocket science. The rocket remains on the autonomous barge for now, and Musk said the first step would be to make sure it wouldn’t tip over, especially with the threat of strong winds coming in. Once the rocket was safe to approach, the crew would board the ship and weld it to the deck using “steel shoes that we put over the landing feet.”

On Sunday, they’ll sail the ship and rocket into port. A fixture will attach to the top of rocket booster so that a crane can pick it up and put it down on land. It’ll set it down onto a stand that’ll allow the rocket to fold up its landing legs. Then the crane can tip the booster over horizontally for transport.

The rocket’s next stop is likely to be Cape Canaveral’s Launch Pad 39A, where SpaceX hopes to test fire the rocket 10 times on the ground, to see if it would be fit to fly again. If all goes well, Musk said they might re-launch the rocket as soon as May or June.