Just cover the airplane with engines, sure 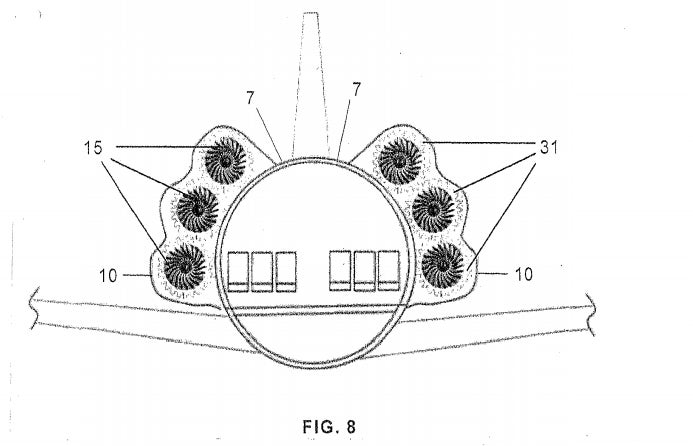 After an interminable wait in three security checkpoints, you finally make it to the terminal and settle in for a little bite of pre-flight food. Flying always gives you butterflies, so you skip the Cricket Bistro and instead grab a Soylent greenshake, chugging it as you make your way to the gate.

After putting your hand through the biometric scanner, and hoverboard your way down the gangway before sliding in the new Airbus A720. As you make your way to your seat, you hope for a window. The last time you flew south was in 2030, and you want to see how much the coastline has changed since then.

Plunking down in the furthest interior seat, you look to the window, and let out an exhausted sigh: there’s no window here. Instead, you’ll have the dull hum of three jet engines just inches from your face for the entire flight.

Okay, most of that is pure fiction for the moment. But the jets in your face is at least within the realm of possibility. Last week, Airbus was granted a patent for “Multi-fan engine with an enhanced power transmission,” which is a dull way to describe “designing jet engines so more can be crammed onto one plane.”

Here’s how Aeropatent described it:

Putting the engines alongside the plane is just one possible permutation of this technology. Another is longer, joined engine-pods below the wings, who produce more power more efficiently by channelling excess airflow into smaller, supporting engines. For decades, the standard way to improve airflow through jet engines has been increasing the diameter of their intake, but at some point the engine is so big that it’s sitting on the ground, which simply won’t do.

That’s good news for engineers exploring the frontiers of modern design. And it’s bad news for anyone who gets stuck next to a noisy engine, where a window once was.