The Arab Spring was a little different from our modern hashtag movements. 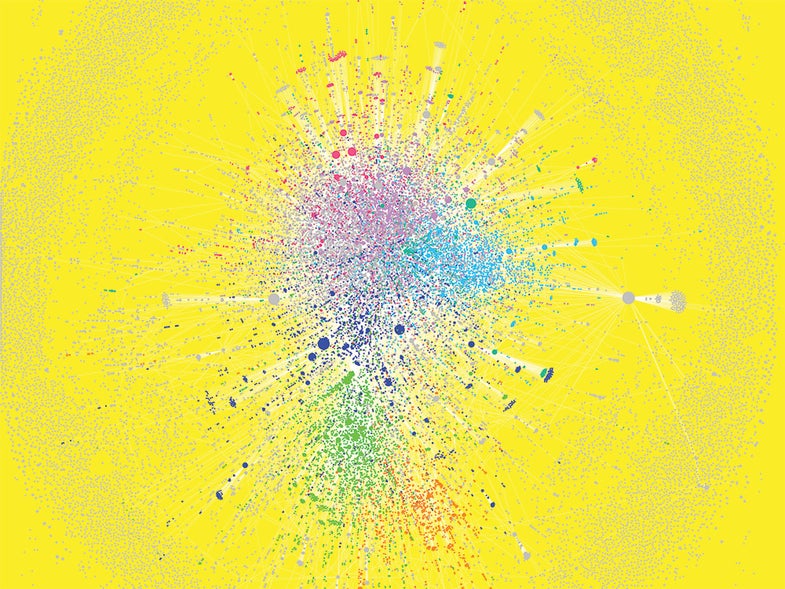 #BlackLivesMatter. #JeSuisCharlie. #MeToo. Today, hashtags are rallying cries synonymous with the movements they represent, often going viral on the strength of a single celebrity tweet. But the first social-­media uprising was different. Instead of 1.7 million #MeToo proclamations propelled by the elite, the Arab Spring snowballed from one ­average citizen’s tweet to the next. Their collective action, enabled by hashtags that linked them together, allowed revolutionaries to rise against despots.

Fervor spread from Tunisia, in 2010, to Egypt, ­Yemen, Libya, Bahrain, and Syria, before withering two years later in the face of autocratic crackdowns and civil wars. Social media couldn’t save the movement, but it connected hundreds of thousands of people under one cause—and changed where change begins.

The lack of huge dots (influencers) illustrates how democratic the Arab Spring was. Information disseminated through a legion of Twitter networks, rather than from one source.

Just 16 percent of those in the Tahrir Square protests that led to the Egyptian president’s resignation had Twitter. Even modern rallies need offline momentum; only one-fifth of the U.S. uses the service.

Revolutionaries from otherwise ​isolated countries were able to communicate and rally online. The message took mere weeks to reach most areas, and no single group stood alone.