Next Week, Watch Venus And Jupiter High-Five In The Night Sky

It's called a conjunction, and it sure is pretty 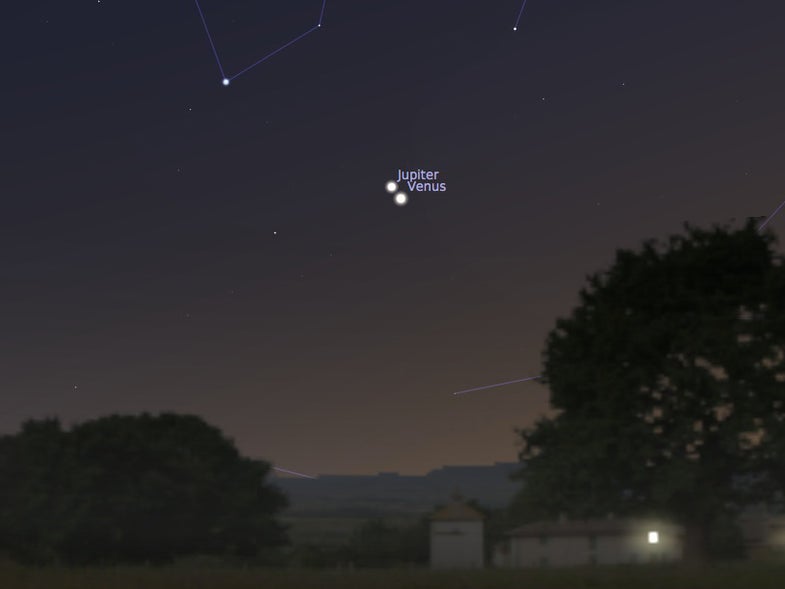 Here’s how Venus [starts on the right] and Jupiter [left, initially] appear at 9:30 p.m. every night for the 21 days closest to the conjunction. The moon appears in the first images but quickly zooms out of view. Animation by Katie Peek, with images from Stellarium software. View larger.

The two brightest stars in the sky aren’t actually stars. They’re the planets Venus and Jupiter, and next week, they’ll be snuggled up next to each other in the evening sky. The configuration, called a conjunction, isn’t all that rare, but it does look cool.

In the next week, on a clear night, look for the conjunction in the two hours after sunset. The union will be visible even from a city street. The highlight will come on June 30 when—at closest approach—the two bright planets will appear just one moon-width apart.

Jupiter-Venus alignments happen every few years, sometimes in the morning sky, sometimes in the evening sky. That’s because Venus orbits closer to the sun that Earth does—so it’s geometrically impossible for Venus to appear more than about a quarter of the sky away from the sun—hence its nicknames, the morning and evening star.

Though they appear quite close in the evening sky, Jupiter and Venus are still separated by hundreds of millions of miles. Here’s how the alignment looks from above.
Space