Video: A Rocket Launch As Seen From An Airplane

That thing is hauling 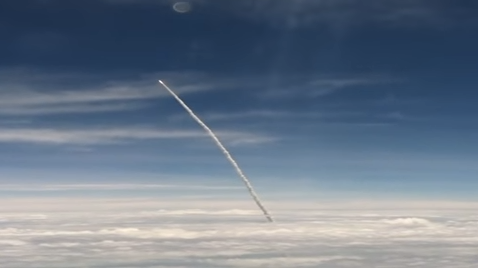 Here’s a sight few people ever see: this footage from a passenger plane caught a rocket leaving Earth at more than 28,000 miles per hour. You can spot the moment when the solid rocket booster separates as the rocket disappears from view.

Contrary to the upload title, unless the videographer hung onto this bit of “whoa, cool” for five years, this isn’t a shuttle launch. It’s more likely the United Launch Alliance Atlas V MUOS-5, launched last week on June 24. The rocket delivered five MUOS satellites and the associated ground system to the U.S. Navy, according to Kennedy Space Center. No people on it, but still pretty neat to watch.

As to who made the video, the details are also a bit hazy: It was posted to Reddit under a serial reposter’s account, and the excellent text on the video alludes to a pilot rotating the phone. Judging from that, along with some background chatter (and a lack of people gasping/babies crying/seats being kicked), this recording probably took place in the cockpit. Thanks, mysterious pilot “Keith.”