Watch This Daredevil Go Over 59 MPH On An Electric Skateboard

Setting a new Guinness World Record, and taking several spills in the process 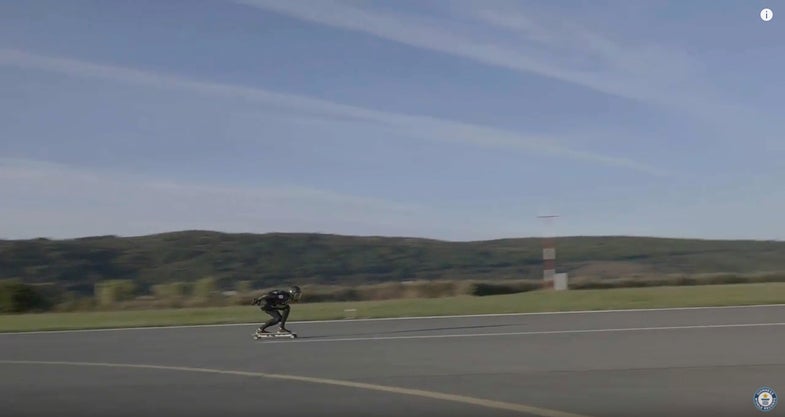 Skateboarders are known for risking bodily harm for great stunts. But this latest one puts almost all others to shame. Today, Guinness World Records announced that a new record has been established: fastest speed recorded on an electric skateboard, a staggering 59.55 mph (95.83 kph) achieved by Mischo Erban, a 32-year-old Czech-Canadian longboarder.

As seen in a video published by Guinness World Records today on YouTube (and above), a well-padded, helmeted Erban takes several nasty spills going at speeds that are better suited to a car. These various attempts and the final record-establishing run were performed last November on a flat runway at the Portorož airport in Piran, Slovenia, giving Erban enough space to speed up and slow down. The record was measured over a distance of 328 feet (100 meters).

The electric skateboard used in this case is a model called the Nextboard. It’s manufactured by a startup company of the same name and isn’t available for purchase by consumers — yet (you can sign up for email updates on the company’s website). Guinness says it is “4-wheel drive,” with motors in all four wheels, and has a range of 6 to 9 miles (10 to 15 km).

Guinness tells Popular Science there is no previous record holder for the fastest electric skateboard run (this is the first time such a thing has been measured by the organization), but Erban previously set the Guinness World Record for fastest downhill skateboard run at 80.74 mph in 2012.

Correction: this article originally erroneously transposed the MPH and KPH values. We have since amended the error and regret it.