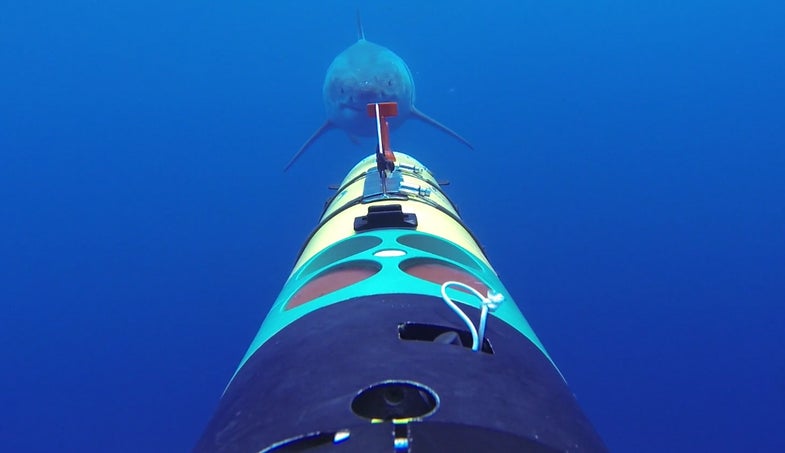 Robots are a great tool for studying sharks. Without the need to breathe, they can stay underwater for a long time, and without any mortality, they have no capacity for fear. Three years ago, a research team led by Greg Skomal of the Massachusetts Division of Marine Fisheries used REMUS torpedo-shaped semi-autonomous underwater drones to study the predatory behaviors of Great White Sharks. And predatory behavior they indeed observed!

At first, the sharks seemed skeptical.

Then they pounced! Though, they quickly became bored of the iron seal and swam away.

Further observations found that the sharks would often lurk below the drones, before suddenly swimming up and striking in the middle, like in the second gif above. Members of the Oceanographic Systems Lab of the Wood Hole Oceanographic Institution captured the footage and compiled it in a video below. The results of the tests were published last month in the Journal of Biology, under the title “Subsurface observations of white shark Carcharodon carcharias predatory behaviour using an autonomous underwater vehicle.” Besides the awesome videos, the reseachers claim “This study demonstrated that an [autonomous underwater vehicle] can be used to effectively track and observe the behaviour of a large pelagic animal, C. carcharias. In doing so, the first observations of subsurface predatory behaviour were generated for this species. At its current state of development, this technology clearly offers a new and innovative tool for tracking the fine-scale behaviour of marine animals.”

Absolutely! Watch it in action below: