If it runs any faster it will fall apart 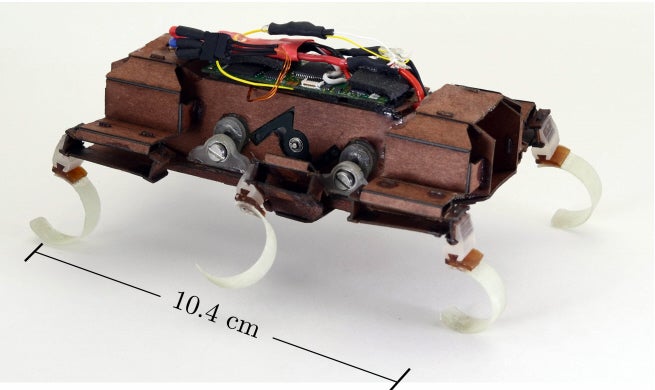 Ever turned on a light at night in summer and watched roaches scatter, and then subsequently thought, “You know, what I’d really like is if these roaches were both faster and robots”? Well, weird-thought-haver, you are in luck. Made by researchers at UC Berkeley, the X2-VelociRoach is the super-fast robot roach of your dreams (or nightmares). Oh, and it can launch other flying robots, too.

X2 builds on the success of the first VelociRoach, which could run at speeds of up to 7 mph. When researchers first tried to speed it up, they found that with more than 45 strides per second (or about 11 mph), it started falling apart, in a literal sense. The X2’s new body replaces rubber legs with fiberglass ones. For flexible joints, Kevlar, that legendarily strong material known for stopping bullets, proved too weak, so the researchers turned instead to rip-stop nylon.

The robot can now reach a top speed of 11 miles an hour, making it the world’s fastest bug-sized robot. The researchers note that this is “the highest frequency the robot could use without losing appendages.” The design is so fast, it tests the very limits of the materials that hold it together. Watch it scurry around:

So what is Berkeley doing with their original version VelociRoach now that they have a faster one to race around? Using it to launch a tiny robot bird into the air, of course: