Watch A Spy Satellite Launch On A Really Big Rocket 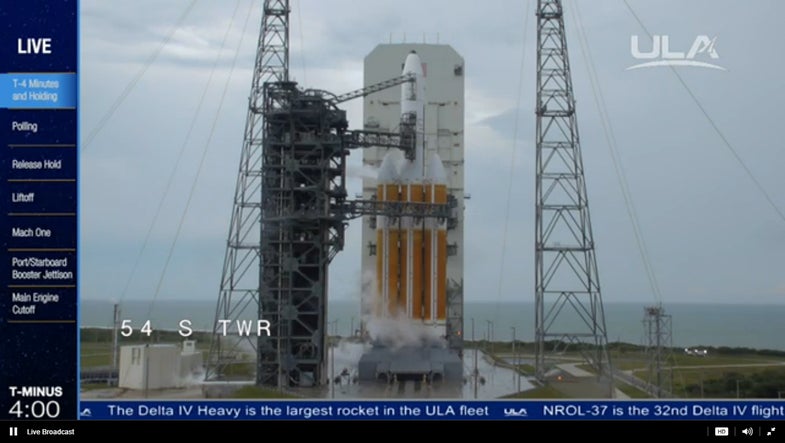 Update 3:55 PM The weather conditions for the launch have not improved. United Launch Alliance tweeted:

At 2:55 PM Eastern Time today, an American rocket will hurl a mysterious something into space on behalf of the National Reconnaissance Office. The something is a “national security payload,” so probably a satellite. The launch, slated for takeoff on United Launch Alliance’s Delta IV Heavy rocket, was delayed from 1:59 PM to 2:55 PM on account of weather at Cape Canaveral.

This is the NRO’s mission patch for the launch:

Why is there a Crusader-like dude on there? The NRO’s Facebook page explains: “The #NROL37 mission patch depicts a knight, a symbol of courage with a chivalrous code of conduct representing bravery, training, and service to others. The knight stands in front of the U.S. flag in a defensive posture as to protect at all cost. The eagle on the chest is a symbol of both freedom and the United States of America. The sword is a message of tenacious, fierce focus with the claws representing extreme reach with global coverage.”

The United Launch Alliance tweeted out a picture of the rocket launching in front of the knight on horseback. Words can’t quite capture the absurdity:

This is the good and not at all weird or ominous symbol associated with what is likely a surveillance satellite.

The launch will start streaming at 2:45 PM Eastern, and the weather is expected to clear.