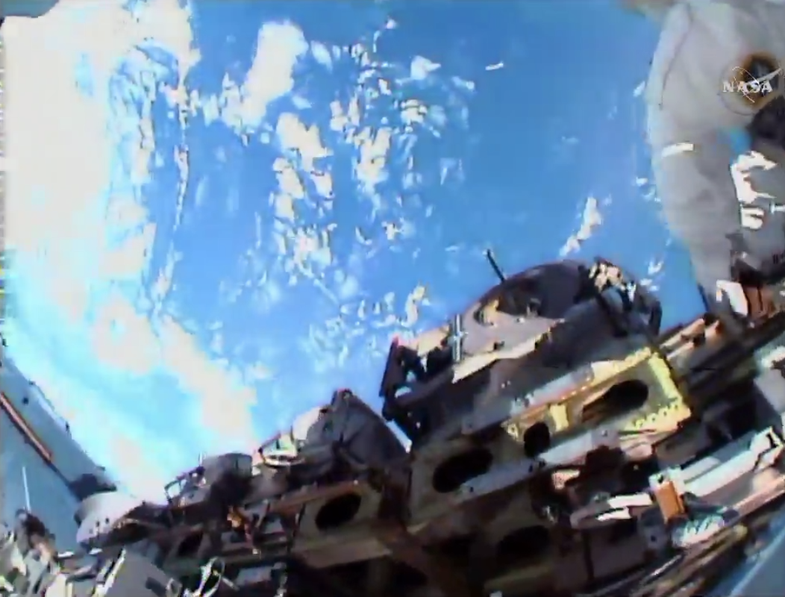 The view from Kate Rubins' helmet camera, looking at the Earth 250 miles away. Rubins is the 12th woman to do an EVA, or extravehicular activity. NASA
SHARE

Astronauts Kate Rubins and Jeff Williams have had a busy Friday morning. They woke up around 1 a.m., did a little warm-up exercise, breathed in some oxygen to cleanse the nitrogen from their bodies, and headed for the airlock. Williams has done this routine four times now, in his career. It’s a first for Rubins.

They switched their suits to battery power at 8:04 — one minute ahead of schedule — and crawled out into the vacuum of space.

They were passing over northern Chile as they stepped out into the orbital sunrise and got to work. Over the next six hours, they’ll install a new port-of-call for space vehicles to park at the International Space Station. It’s one small step for affixing more stuff to the outside of the ISS, and a giant leap for the future of privatized spaceflight.

This first of two international docking adapters rode a SpaceX rocket to the ISS in mid-July. It’ll open new doors for commercial crew Boeing and SpaceX partners. It’s the first to comply to the International Docking System Standard, allowing any company in the world to build to that model.

Read more about the docking adapters, and watch them at work and listen to NASA commentary until around 3 p.m. ET on the NASA live stream here: