Funny, Marty McFly was supposed to do that in October 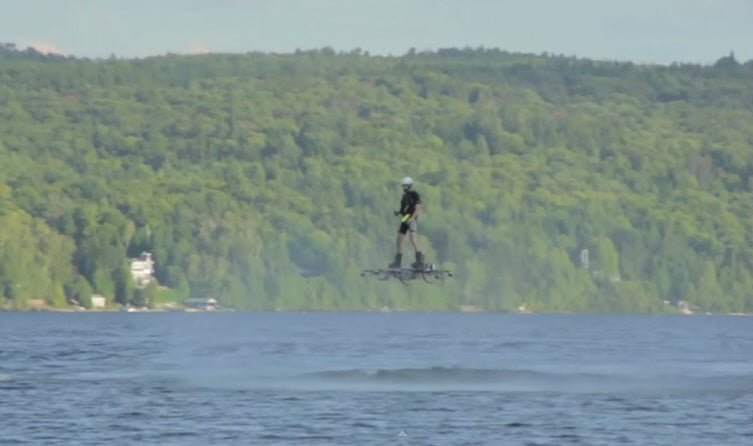 Although the movie was set in 2015, Back to the Future Part II-style hoverboards remain the province of fiction or elaborate marketing stunts. But that didn’t stop Catalin Alexandru Duru from building a device inspired by the film, and then, with a crew from the Guinness Book of World Records there to confirm it, flying it for almost 1000 feet over a lake in Quebec.

Like the X-Games cousin of a Segway, Duru’s board is controlled by balance. Propellers spinning underneath the board give it lift. Duru writes in the video’s description that “The prototype can be used anywhere, but is usually tested over water because of how dangerously high it can fly (which is ironic considering that the movie joked that it can’t).”

Like other hovercraft, this hoverboard presumably has counter-rotating blades keeping it and its rider aloft, as if he strapped a quadcopter to each foot. To qualify for therecord, Duru just had to fly a distance of 160 feet, but he soared past that, traveling 905 feet and 2 inches before sinking triumphantly into the lake.

Watch his flight below: