A model volcano, that is 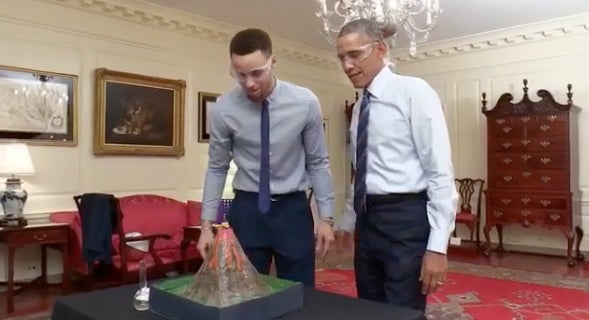 The White House gets a lot of celebrity guests. Recently, President Obama invited one Stephen Curry, point guard of the seemingly unstoppable Golden State Warriors, to help him promote My Brother’s Keeper, a volunteer mentorship program the Obama Administration launched in 2014 to help young African-Americans succeed. Among the various things Obama and Stephen Curry did together as part of their promo for their program was erupt a model volcano — a classic science fair project that’s usually pretty fun for all involved.

But Obama — a noted fan of the Chicago Bulls, whose all-time winningest season the Warriors just surpassed — couldn’t resist the opportunity to joke about the volcano giving Curry a potentially career-ending injury. Check out the figurative and literal burn in the video the White House recently posted to Instagram above. And watch the full video of the two men clowning around below.