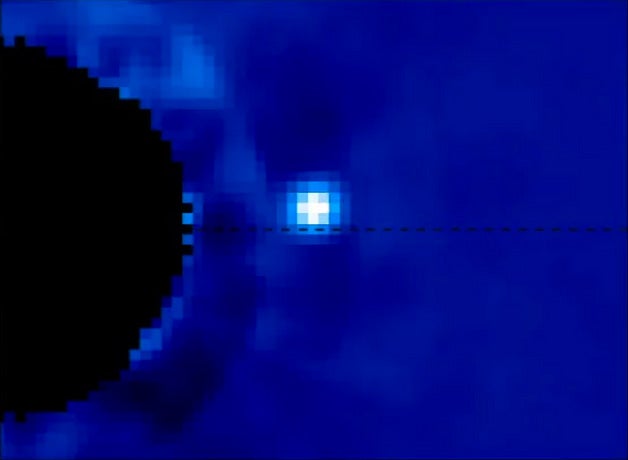 Billions of planets are thought to be looping around the Milky Way’s stars. We know they’re there because of the way they bend the light around their stars, or the way they block out the star’s light as they pass by. But it’s not every day we get to see one directly.

A short new video composed of images from the Gemini Planet Imager (GPI) gives us the best view yet of an exoplanet orbiting another star. In the video below, the black circle is the star Beta Pictoris, located 63 light-years away. The bright dot is Beta Pictoris b, a gas giant planet that’s at least four times as massive as Jupiter and takes 22 Earth years to orbit the star. Those speckles of light are part of an enormous disk of debris that orbits the alien sun.

This isn’t the first time GPI has shown us direct images of Beta Pictoris b, but these images provide an even closer look. They were collected as part of a study that refines the measurements of the planet’s orbit and the debris disk.

“The images in the series represent the most accurate measurements of the planet’s position ever made,” Maxwell Millar-Blanchaer, an astronomer at the University of Toronto, said in a press release. “In addition, with GPI, we’re able to see both the disk and the planet at the exact same time. With our combined knowledge of the disk and the planet we’re really able to get a sense of the planetary system’s architecture and how everything interacts.”

Since stars are about a million times brighter than the planets orbiting them, they obscure our view of the exoplanet. But by blocking the brightness of the star, as well as using adaptive optics that compensate for our atmosphere’s distortions, GPI gives us a clearer view of alien solar systems.