Watch People Walk Across A Bridge Built By Drones 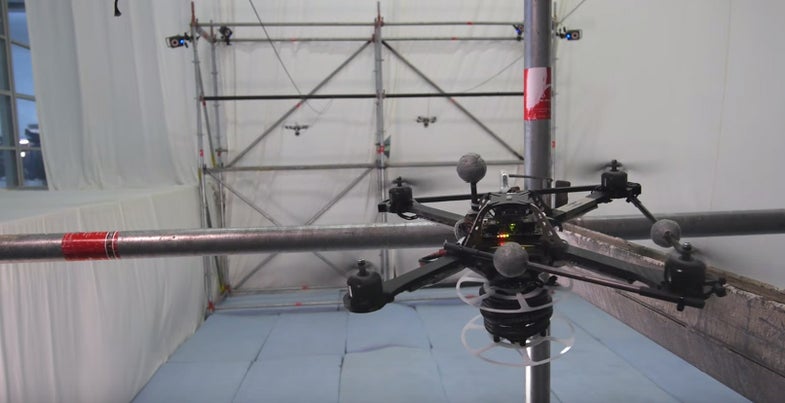 Bridges are a millennia-old answer to the challenge “you can’t get there from here.” While techniques and styles of bridge building have changed over the centuries, the fundamental problem remains: how to connect land over a gaping chasm of some sort. Typically, the answer involves people working on both sides, building a structure that meets in the middle. What if, instead of a huge infrastructure project, a bridge could be built without any humans needing to cross to the other side until the bridge is complete? Here, a few drones do just that:

The team of drones (I spied at least three working together) tie cords around two sets of scaffolding to form a suspension bridge. Filmed at the Flying Machine Arena on ETH Zurich’s campus, the drones worked autonomously to build an almost 25-foot-long bridge between scaffolding.

Here’s a close up of one of the drones fastening a rope around the scaffolding:

Cameras nestled in the arena are part of a “motion capture system that provides vehicle position and attitude measurements,” and information is fed to the drones as they build. This means the system likely isn’t ready for real-world use just yet, and that’s fine. There’s a lot of research to be done now, and when it comes time to move beyond the laboratory setting, well, they’ll cross that bridge when they come to it.

Watch the full video, complete with people actually crossing the drone-built bridge, below: