There's actually gonna be a livestream this time 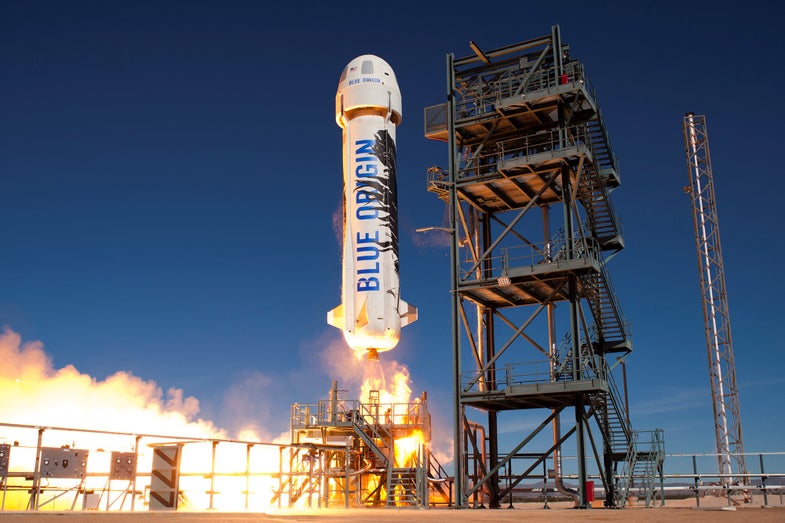 The first thing to happen, after you board, will be the New Shepard booster roaring to life, getting ready to shoot you into outer space. This is pretty typical of any rocket launch (obviously). The weird thing is that the New Shepard booster is probably on its second or third flight, which is why your ride into space wasn't more expensive to book. Don't worry, though, it'll still be expensive. Good thing your a wealthy rocketeer. Blue Origin
SHARE

Jeff Bezos has finally named a time to tune in to Blue Origin’s rocket launch on Sunday. The company’s livestream, which you can watch above, just started, though it looks like the 10:15am launch has been slightly delayed due to high heat at the Texas launch site.

The launch was originally scheduled for Friday but got bumped to Sunday due to some leaky o-rings. Things are looking good for today’s launch, according to Bezos.

This will be the reusable New Shepard rocket’s fourth time traveling into suborbital space, where it will deploy an uncrewed capsule in a first-of-its-kind parachute test. Blue Origin will deliberately fail one of the craft’s three strings of parachutes, just to see whether the capsule’s other two parachute strings and retrothrusters will be able to carry it safely back to Earth. This is an important fail-safe to test, and a necessary step toward Blue Origin’s ultimate goal of carrying civilians into space.

After launch, the rocket will attempt its fourth vertical landing.

Sunday’s livestream will be a first for Blue Origin, which, unlike SpaceX, normally keeps its launches as hush-hush as possible. Allowing the public to partake is definitely a welcome change.