To space and back, again 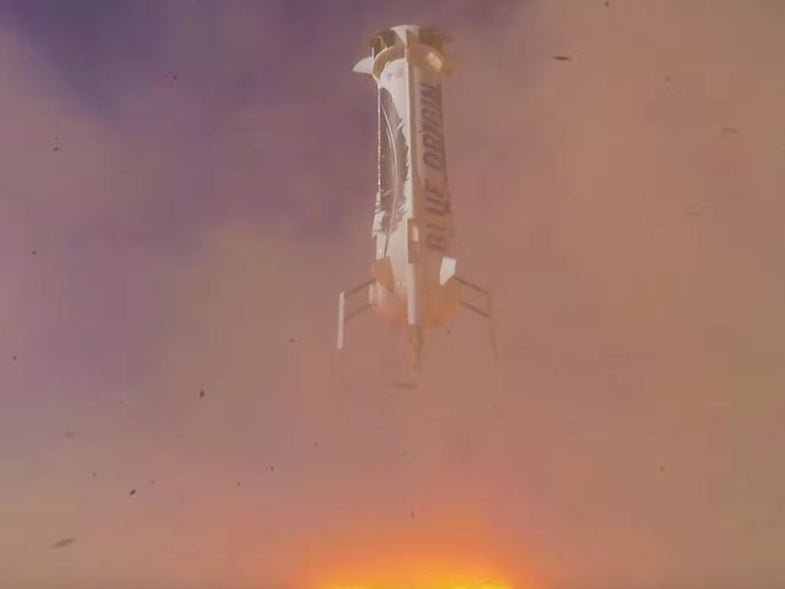 We had a hunch that Blue Origin was up to something.

In November, the private spaceflight company founded by Amazon’s Jeff Bezos launched a rocket and then landed it vertically on the ground. Now Blue Origin has done it again using the same rocket booster from the November launch, beating SpaceX in becoming the first company to actually reuse its vertical-lift rocket.

On Friday, Blue Origin’s used New Shepard rocket booster launched to a height of 333,582 feet and deployed an unmanned crew capsule that the company hopes will one day carry tourists into space. Then both the booster and the crew capsule touched down safely–the rocket with the help of its thrusters, and the crew capsule relying on parachutes. Watch it here:

SpaceX has also successfully landed one of its rocket boosters, and although preliminary tests suggest it might be fit to fly again, the company would rather keep it as a souvenir. In the future, they intend to launch and reuse their Falcon 9 rocket boosters.

SpaceflightNow notes that “while the New Shepard did not attain the speed required to reach Earth orbit, it did pass the internationally-recognized boundary of space of about 62 miles, or 100 kilometers.” That’s an essential difference between the Blue Origin rocket and SpaceX’s rocket, the latter of which needs to be a lot more powerful to propel its payloads into orbit.

The New Shepard landing was a little off-center, but in a blog post, Bezos explains:

Why are these companies racing to land and re-launch their rockets? Well, up until now, we’ve thrown away rockets after using them once. If we could “launch, land, repeat”, as Blue Origin’s PR video suggests, it could make getting to space and back a heck of a lot cheaper.