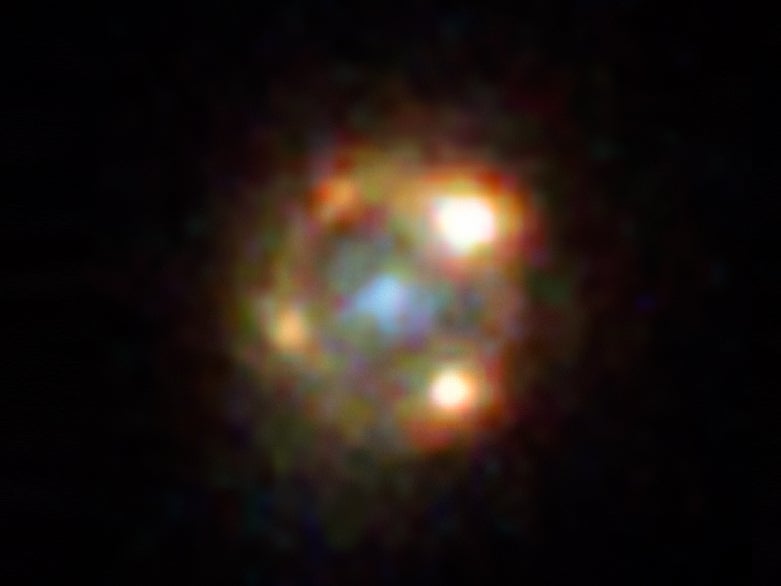 Although the night sky often seems so peaceful and still, a closer look reveals constant movement and change. The Intermediate Palomar Transient Factory (iPTF) in California looks for ephemeral phenomena in the heavens, like stars that fluctuate in brightness, or planets passing in front of their stars.

One night in September of 2016, the observatory spotted something that hadn’t been there before: a supernova had popped onto the scene.

“What caught my immediate attention on this one is that it was way too bright, considering its distance to us,” says Ariel Goobar, a cosmology and physics researcher at Stockholm University. “It shone more than 50 times more intensely than it should.”

The results are published today in Science, and they could help measure how quickly the universe is expanding—something cosmologists are still debating.

Like a heavy bowling ball on a rubber sheet, the gravity of a galaxy or other massive object can warp the fabric of space-time around it. So when the light the supernova (dubbed iPTF16geu) encountered this galaxy, the galaxy acted like a lens, splitting the light into four separate images, and bending it in a way that magnified its intensity.

A team at the University of California, Berkeley, was the first to image a gravitationally lensed supernova in 2015. Today’s announcement is exciting because the type of supernova should make it easier to probe the structure of the universe.

iPTF16geu is a type Ia supernova. These dying stars burn at a consistent brightness, which helps scientists measure how far away they are. For this reason, they’re called standard candles.

Because Goobar and his team know how the light from this supernova should change over time, they’re using it to estimate the difference in arrival times for the four images of the supernova, which arrived via separate pathways through space. This difference in arrival times “is very precious,” says Goobar, “since it can be used to measure the expansion rate of the Universe, i.e., the Hubble constant.” That work is still ongoing.

The Palomar facilities are about to get 10 times more efficient, thanks to some upgrades slated for this year. Goobar and his team are hopeful that they’ll discover more gravitationally lensed systems like this in the coming years, to further refine their measurement of the universe’s expansion rate, and with any luck, shed some more light on the lensing effects of galaxies.

Robert Quimby, a co-author on the new paper, says he was surprised that iPTF managed to find this object. Scientists expected that objects that are farther away are more likely to have a big object pass in front of them. But iPTF can’t see very distant supernovas.

“It is tough to draw conclusions from just one event,” he says. “We have more to learn about gravitational lensing and how common lenses with such high magnification are in the Universe.”