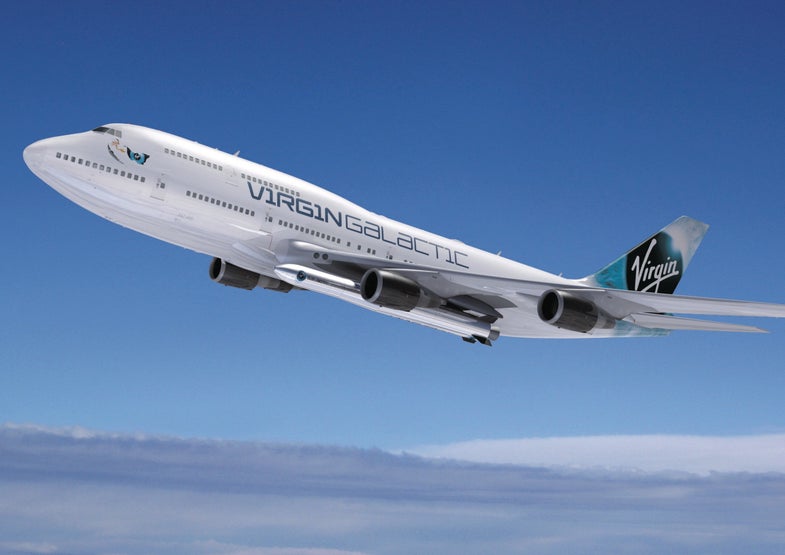 Space is expensive, but air flight is not. Space gets cheaper if the object going to space is launched from higher in the atmosphere, so in recent years people have experimented with turning airplanes into satellite launch platforms. DARPA recently abandoned an attempt based on fighter jets, but Richard Branson’s Virgin Galactic is exploring a similar concept in a giant body: a retired 747 jumbo jet named “Cosmic Girl.”

The converted jet, selected for its excellent maintenance and flight records (and not for its perfect name), will be modified to fire LauncherOne rockets. These two-stage rockets were originally designed for Virgin Galactic’s WhiteKnightTwo high-altitude plane, but the converted 747 will be able to carry a larger payload. Unlike the reusable dreams of other billionaire-funded private spaceflight companies SpaceX and Blue Origin, LauncherOne is expendable.

The rocket will be slung under one wing, “adjacent to the position that has been used by other 747s to ferry a fifth engine”, according to the press release.

The rocket is billed as ideal for launching small satellites, and Virgin Galactic thinks Cosmic Girl and LauncherOne can keep launches priced at about $10 million. That seems as low as anyone offers for a dedicated small satellite launch, and while small satellites are often passengers on other big rockets, it costs about $4 million to put a payload a third the size of LauncherOne’s onto a big rocket. Ten million dollars is not quite the $1 million that DARPA’s hoping to get to some day, but it’s not bad.

Watch a promotional video for it below: