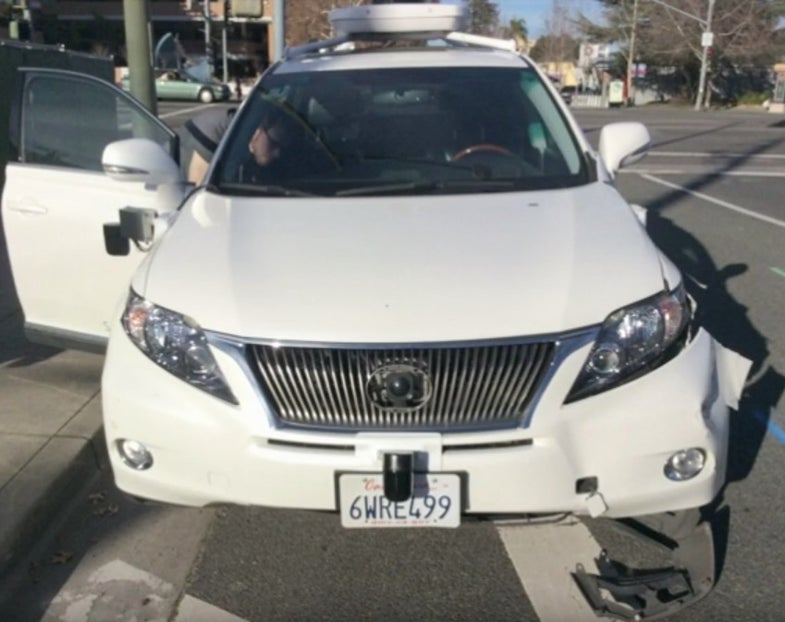 Google’s self-driving cars have logged nearly 1.5 million miles on the road in 2009, and until February 2016, none has ever actively hit another car. In every incident, human-driven cars rear-ended or struck Google’s autonomous buggies.

But on February 14, Google’s self-driving car hit a municipal bus in a very low speed collision. According to Google’s monthly report on their cars, the autonomous car was traveling at 2 mph, and the bus was going approximately 15 mph. The collision happened from the side, when the car mistakenly pulled into another lane ​during a right turn to avoid an obstacle in the road. The test driver assumed the bus would stop for the car.

A new video from Associated Press shows the interior of the bus during the crash, as well as exterior damage photographed at the scene. Google’s car hit the bus’s right door, located in the middle of the bus. A small portion of the car’s body broke off and was embedded in the soft plastic of the door. There were no reported injuries to the Google test driver, or any passengers of the bus.

The obstacles that caused the Google car to change lanes were sandbags covering a storm drain.

In their February report, Google says they do bear some responsibility for the accident.

Google says they hope to learn from this incident, and use the data to make the autonomous mode safer in the long run.