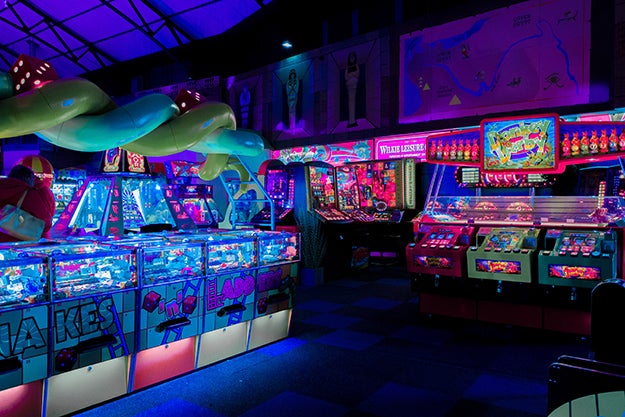 Giving a pop culture icon a nostalgia-fueled reboot or remake isn’t a new concept, but often the new version fails to recapture what it is we loved about the movie, TV show, or game in the first place. So when a fresh take is well done, it deserves to be recognized.

Get ready for a dose of the warm fuzzies as we take you back with these awesome new takes on games that have earned the title “classic.”

Anyone who was a child in the ’80s has dreamed about having their own coin-op game. Arcade1Up has made that dream more accessible with their line of slightly sized-down (each cabinet comes in at around 4′) classic arcade games. For less than the price of a next-gen console, you can have stand-up versions of unimpeachable classics like Galaga, Pac-Man, Street Fighter, and even one that combines Joust, Gauntlet, Rampage, and Defender in one machine. Arcade1Up has also announced it will be releasing an 80th birthday tribute to Marvel Comics later this year with a machine featuring the arcade classics Marvel Super Heroes, X-Men: Children of the Atom, and The Punisher.

For those whose video game nostalgia doesn’t extend as far back as sweaty, crowded, smoke-filled arcades, there is this beauty courtesy of Nintendo. Revamping the classic Super Nintendo into a simple, plug-and-play device that has 21 games (including Super Mario Kart and Street Fighter II Turbo: Hyper Fighting) already pre-loaded is simply genius. This is retro done right. The console is smaller than the original and, again, is simply a plug-and-play experience that works with pretty much any TV. It’s everything you love with zero hassle.

There are pretty much two ways to approach a reboot: you can either be reverential of the original, or you can take the piss out of it. Hasbro has decided to have some unexpected fun with some of their classic old school board games. Joining games like Clue: Lost in Vegas and Risk: Office Politics comes Sorry: Not Sorry!, a version of the classic that is aware that it one of the most relationship-destroying board games of all time. It’s a neat way of repackaging something while also offering enough of a new look and feel to make it fun to dive back into.

Snarky new takes on classic games is a great way for Hasbro to approach its back catalog, but it’s been trying for a long time to breathe new life into Clue by offering licensed versions based on movies and TV properties. For the most part, these have been little more than re-skins—which is why the Harry Potter edition stands out. It’s one of the rare promotional tie-in games that really adds something unique and different to the overall gameplay. In addition to “house points” that can be lost at various points in the game (meaning you could “die” and be knocked out before you even have a chance to solve the mystery) the board itself mimics the “Marauder’s Map” from the film and, like at Hogwarts, the castle’s architecture changes during play. Doors lock and unlock, secret passages change destinations. It’s on-brand with the source material, and actually does make Clue seem new and fun again.

The makers of Jenga know what you’ve been asking yourself: Is it possible to make a version of Jenga that adds the additional threat of bodily harm and possible property damage? And the answer is a resounding “Yes”! As far as reboots or updates go, this one is brilliant in its simplicity and simple OMG factor. Walk into any room with a bright orange duffle bag filled with giant Jenga bricks and you now have the floor. Beyond that, it’s just simple Jenga—albeit Jenga that will eventually tower over you, making each move that much more tense and potentially devastating. Not recommended for people with cats or toddlers.

While not an update to an actual game, Ravensburger’s Jaws board game re-invents the classic film. One player is the shark, while the rest must find a way to get rid of the menacing, murderous creature. The strategy game lasts for two rounds or “acts.” The human characters must use their abilities—found on the player cards—to locate the shark and save swimmers, while the shark secretly moves around the water feeding. The game is intended for ages 12 and up.