The unique, horrifying way that the ancient predators killed their prey 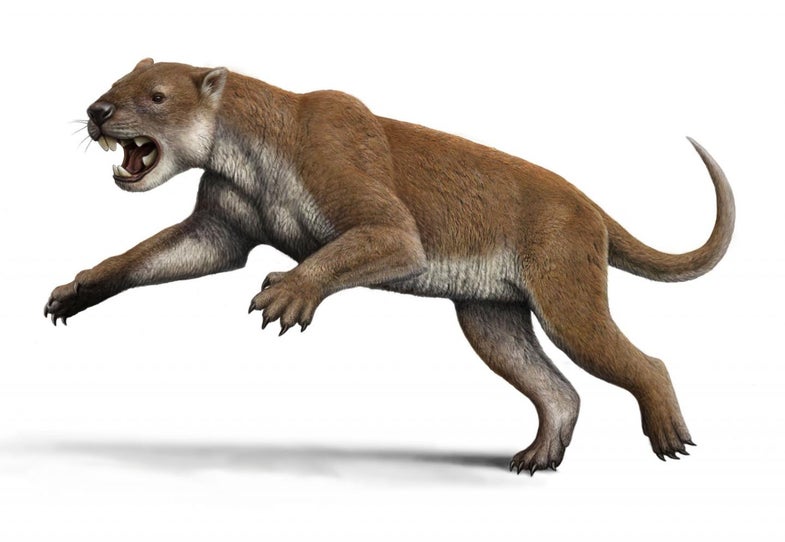 An ancient, lion-like hunter could rotate its forearms more than any mammalian carnivore alive today. The marsupial lion Thylacoleo carnifex relied on its unique elbows and large dewclaw to slash and disembowel prey, paleontologists speculate in the August issue of Paleobiology.

Thylacoleo roamed Australia during the Pleistocene Epoch, and stood about two and a half feet tall at the shoulder. Its fossils were first discovered in the 19th Century, but paleontologists have remained puzzled about how it killed its prey.

To shed some light on the marsupial lion’s dining habits, paleontologists analyzed the elbow joints of many living mammals. The team then compared the living animals’ elbows to those of Thylacoleo.

“If Thylacoleo had hunted like a lion using its forelimbs to manipulate its prey, then its elbow joint should have been lion-like,” coauthor Christine Janis, of the University of Bristol and Brown University, said in a recent statement. But instead, it bore an elbow joint unique from those of living predatory mammals, she said.

The Thylacoleo was able to maneuver its forearms to an “extreme degree,” allowing it to grasp and manipulate prey more skillfully than the African lion can, and shred prey with its claws rather than its teeth.