U.N. Claims Some Responsibility For Bringing Cholera To Haiti 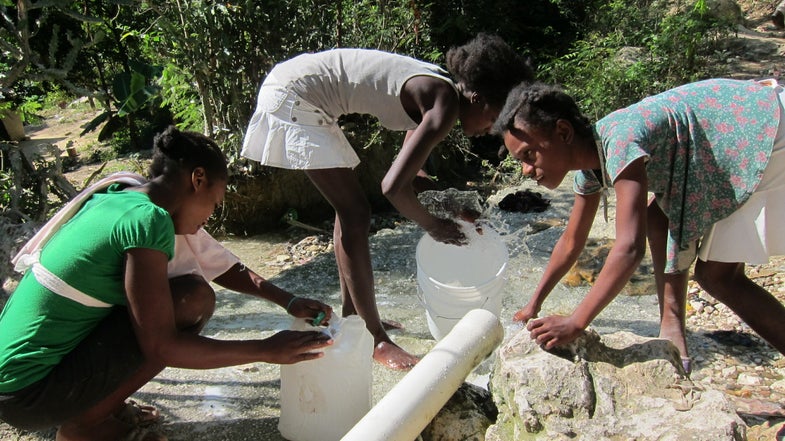 The United Nations admitted in an email to The New York Times that U.N. peacekeepers accidentally played a part in bringing cholera into Haiti in 2010, killing 10,000 and sickening hundreds of thousands.

In 2010, U.N. peacekeepers arrived in Haiti from Nepal, where a cholera outbreak had been reported. The workers settled in base housing near the Meille River, where waste reportedly leaked into the river on a regular basis. Soon, people around the camp became infected with cholera, a bacterial disease that can travel through water systems and causes severe dehydration, diarrhea, and death. Even though the U.N. only claimed partial responsibility for the outbreak, a report from experts who advise the U.N. on human rights issues states that cholera “would not have broken out but for the actions of the United Nations.”

Over the last five years, a lack of funds has allowed the disease to spread across the country. None of the major water and sanitation projects in Haiti was completed as donations dried up, leaving civilians without readily accessible, clean drinking water. Infection rates continued to climb since 2014 as the U.N.’s cholera eradication program has failed, according to The New York Times. The organization hasn’t been able to raise the required $2.27 billion to beat out the disease, and the office of Secretary General Ban Ki-moon wrote in the email that there would need to be a “significant new set of U.N. actions.”

This isn’t a new story, but this is the first time that the U.N. has taken even some responsibility for the Haitian outbreak. Since the initial outbreak, the U.N. had tried to skirt the issue and deny its involvement. In 2011, the U.N. denied redress to the families of 5,000 Haitian cholera victims and refused to appear in a federal court when the families eventually sued. The redress, which would compensate for the 10,000 people killed and 800,000 affected, would total $40 billion and did not take into account the thousands certain to become infected and die in the next few years.

In September, the final report about the Haitian cholera outbreak will be presented to the U.N. General Assembly in New York.