Turn Up The Bass, Turn Down The Heat 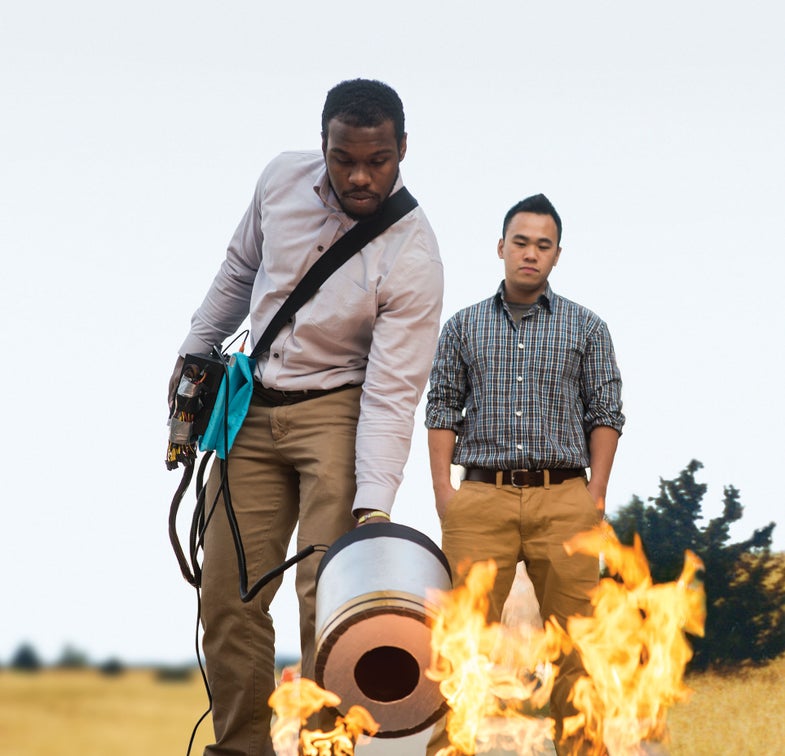 When Seth Robertson and Viet Tran announced that they wanted to build a sonic fire extinguisher, they were met with skepticism. The pair, both engineering majors at George Mason University, could not find a professor to support the project. Then they reached out to electrical engineering professor Brian Mark. “He said, ‘I’m the one who’s gonna give you the grade, and I won’t fail you,” Tran says. “We were like, ‘Great, let’s do it!’”

The concept of using sound to suppress fire is not new. Pressure waves push away the oxygen a fire needs and spread the flames over a larger area, reducing heat and weakening the blaze. In 2011, DARPA released a video showing two massive speakers extinguishing a fire placed between them. Robertson and Tran were convinced they could develop this idea into a practical, handheld device.

The trick was finding the right frequency. The students tried for eight months before finally identifying the acoustic sweet spot: low-frequency rumblings in the 30- to 60-hertz range. “When we first put out a cigarette lighter, we were pretty excited,” Robertson says. Later they were able to snuff a frying-pan fire in a matter of seconds.

Unlike sprinkler systems or traditional fire extinguishers, the pair’s backpack-size Wave Extinguisher leaves behind no chemicals, powder, or water. Eventually, Tran imagines fleets of drones using sound to beat back flames from buildings or forests. This would keep firefighters out of danger and alleviate the need for thousands of gallons of water.

After graduating last May, Robert­son and Tran formed a company, Force SV, to perfect and commercialize their invention. As Robertson says, “We want to revolutionize how firefighting works.”