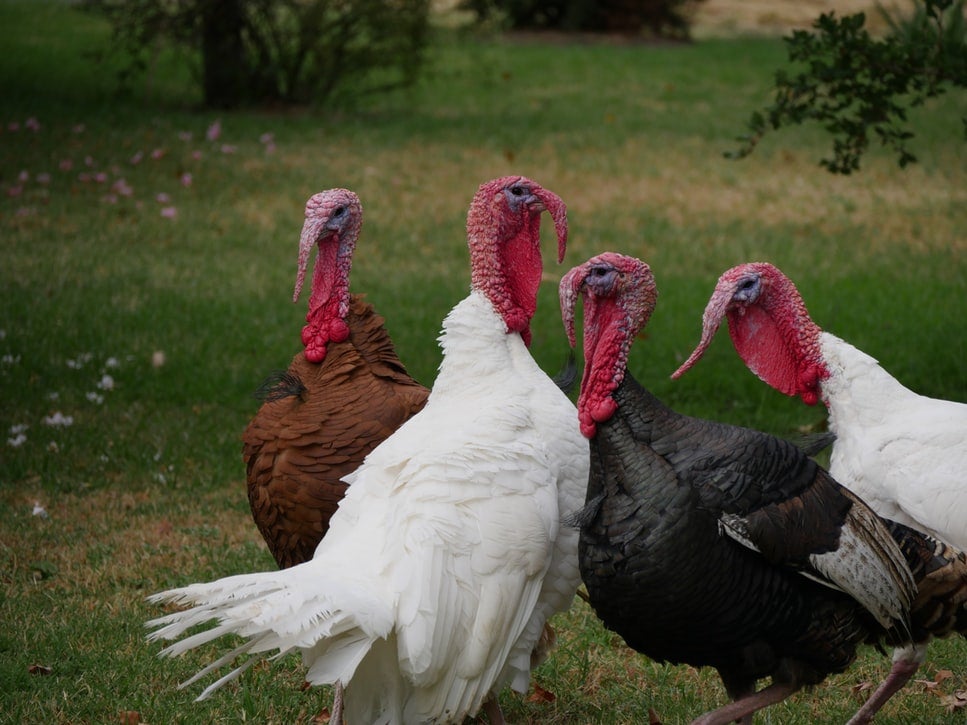 Back in 2017, the ‘net became briefly obsessed with a video of turkeys holding a strange, circular vigil around the corpse of an unfortunate cat in the street. Two years later, the video has started circulating again—those death birds are back, baby, and they’re better than ever.

turkeys walking in a circle around a dead cat in the middle of the road pic.twitter.com/o2ZqtJuNV4

There’s certainly something compelling about what seems to be an avian black mass afoot. But what’s really going on, according to a 2017 blog post from the National Wild Turkey Federation’s Mark Hatfield, has more in common with an Instagram influencer’s half-hearted attempt at a full moon ritual than any true witchery. In Hatfield’s words, “turkeys are very basic.”

The birds, Hatfield explained are just keeping their distance while deciding whether or not the extremely dead cat in question might be a threat. Hatfield’s colleague Tom Hughes speculated to National Geographic at the time that the behavior of the cat, whether it was fully dead or still dying, may have struck the birds as strange and prompted an investigation. The circular nature of their march is just a result of their instinct to stay within the safety of their flock.

In other words, what looks like extremely ominous behavior to human eyes is actually just a bunch of birds who can’t decide how scared they should be of roadkill.

It’s also possible they’ve totally moved on from examining or trying to intimidate the feline, and instead have sort of forgotten why they’re following one another. “It’s not unusual for them to get into those dances where they chase each other around,” California Department of Fish and Wildlife’s Scott Gardner told The Verge back in 2017.

Given the sort-of-pathetic reality behind this almost-super-hardcore behavior, you might find yourself wondering: just how stupid are turkeys? The answer is: not particularly stupid. Even domesticated turkeys, which have been bred into a fat and helpless existence so we might feast upon their subpar flesh once or twice a year, don’t deserve their bad reputation. The idea that these birds are so unintelligent that they’ll drown in the rain is easily debunked. At least some turkey owners swear they’ve been able to train their flocks to respond to herding and anticipate feeding times. No one is going to get a turkey to solve a puzzle or play fetch, but they manage out in the world just fine.

And just because turkeys are liable to lose hours of their lives running in circles around a cat corpse doesn’t mean you shouldn’t take them seriously. They can actually be quite terrifying.

Because wild turkeys rely heavily on establishing and maintaining so-called pecking orders within their flocks, any animal that acts scared of them is liable to get bullied. Humans are no exception, and people who interact with wild turkeys without working to establish dominance—making loud noises, throwing tennis balls, wielding a squirt gun—can find themselves in trouble. During wild turkey breeding season especially, male turkeys are known to get aggressive with other animals (or reflective surfaces). Once a bird gets bold, it can be hard to reestablish your own dominance—which can eventually lead to animals growing violent enough that animal control has to step in. So while it might seem rude (or just unnecessary) to run into your yard yodeling and waving a broom every time a flock of turkeys starts messing with your bird feeder, you’re actually doing them a favor by keeping them afraid of humans.

So clean up any tempting seeds or crops in your yard, set a spray bottle by the door, and cover all the mirrors: these creepy fowl might not be summoning demons in the streets, but you may find yourself with a need to exorcise them.