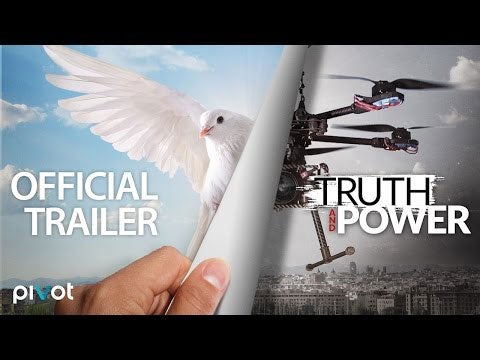 Incumbent cable channel Pivot launched in 2013 with the express goal of connecting with millennials through good, old fashioned, pay TV.

Though reaching just 47 million households, the channel, which is backed by Participant Media, has launched some interesting programming, including Fortitude, a murder mystery on a fictional Arctic island, and now Truth and Power, a multi-part docuseries hosted by Maggie Gyllenhaal and executive produced by Brian Knappenberger, who directed The Internet’s Own Boy: The Story of Aaron Swartz and We Are Legion: The Story of the Hacktivists.

Episode two explores malware and premieres on Pivot tonight at 10 p.m. ET, while episode three, which explores the origins of private companies selling spyware to regimes, airs next Friday. We spoke to Knappenberger about the show and the need to have a serious conversation about cryptography and encryption without fear-mongering.

I had been interested for quite a while, and a lot of my work has had to do with technology and how it intersects with civil liberties. I did We are Legion before Aaron’s documentary, and it is a more robust look at the hacking community, the chaos of it, and also the issues … people taking up arms in various ways online and hacking. I was in the middle of that. I was talking about that film at a panel within a week or so after Aaron died, and I was surrounded by lots of people who knew him, so I was in that community. I was already fired up about these issues.

We have been fired up about this for a while. And have been following the encryption debate for a long time. It is a vibrant relevant conversation right now.

Encryption has been around for a while, but it seems like just now it is reaching the mainstream conscious.

It is fascinating. It’s been alleged ever since the crypto wars of the 1980s and 90s that somehow encryption is a dangerous thing. That really does kind of strike at the heart of this balance, between civil liberties and technology, and how does the more traditional notions of being able to search or privacy, protection from the fourth amendment, how does that work in the digital world.

Why is it that community and national safety is always tied to having unfettered access to information?

I think it comes down to powerful entities wanting more power. One person we spoke with in tonight’s episode says, “every political movement starts with a private conversation.” And so communication is right at the heart of who we are. There is no one serious in the tech community who says that there is a safe backdoor to these things. There is no way to…even if you accept the notion the FBI should have a backdoor, there is no way that is safe so that they are only able to look at it.

We go through these periods of time in our society where we get seized with fear and anger over things like terrorism, and these things seem like a good idea to people. Or are used by entities to try to gain more power. And we have to resist that. There are bad actors, but there also needs to be protections and checks on power.

How do you as a journalist and an artist straddle that line?

It’s tricky. In fact, it’s gotten to the point where I stop directly recommending certain things. I feel a sense of responsibility if those things are compromised in some way. This is a serious stuff, if you are talking about protestors or journalists or sources. There are people in a vulnerable position. You have to think about what the threat model is, and what is at stake for some people. You can’t go into various conversations haphazardly with sources in which there will be real retribution. You need to understand what the threat model is. You may not need full encryption for everything, but you have to be serious about it. There are different levels of openness, but there are very real stakes there.

I take it seriously, but not everything I do is encrypted at the highest levels. In terms of priority, I think as a journalist you have to be serious about someone who is in a vulnerable position. We engaged in a surveillance debate before Edward Snowden but now we need a nationwide discussion on these kinds of tools and how they align with the fourth amendment. You want to get people to understand what this new world is, and what it is at stake.

It’s a strange juxtaposition, right? We experience more online freedom than ever, but not really.

It’s a tension of our time right now. We started the second episode these activists who believed they were being targeted by malware, and they found out they were being tracked by the Moroccan government, which used a piece of malware by the Hacking Team. They were a shadowy business selling these kinds of malware tracking tools selling to regimes around the world. And we have arms embargos with these regimes, we consider them to be bad actors, but these companies make money selling malware that can take over your computer.

We got an interview with the Hacking Team, their PR person, and we started asking who do they sell you? They said no worries, we vet the regimes we sell to. And then the Hacking Team was hacked last year, and it happened three weeks after our interview. So we have 400 gigabytes of data in which we can fact check the interview we had just done. How often does that happen?

What is your opinion of how this online security debate plays out with the 2016 election?

If you listen to Republicans, they say we need to track and trace everybody. And the Democrats say they are going to team up with Silicon Valley. But they are both playing to fears like San Bernardino and other attacks, using that fear and that anger to gain votes for them and then enact draconian laws when it comes to the Internet.

But we have to push back because it is not that simple. What we think is most important—”American values”—they need to make it into the digital world. We need to be diligent in not going overboard with our fear.