Transparent frogs, solar arrays that look like fruit roll-ups, and other amazing images of the week 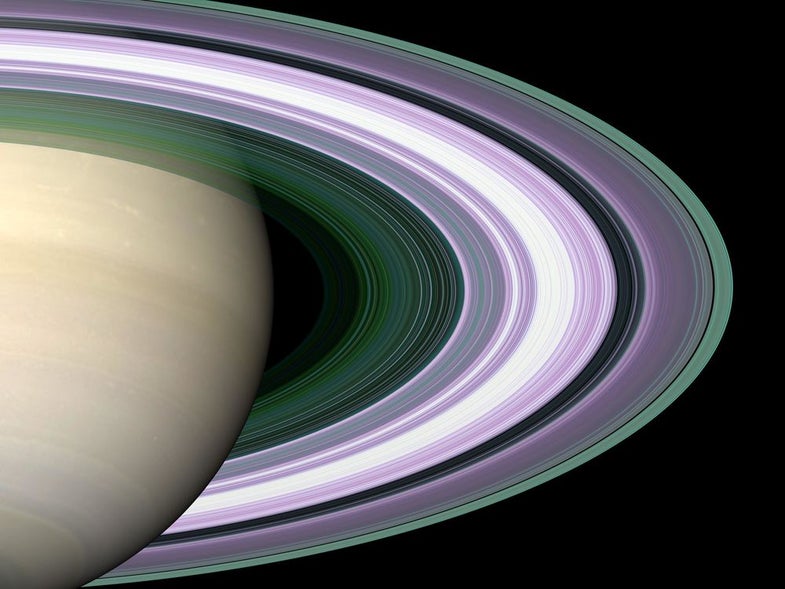 Come September, NASA will be saying goodbye to one of its best image-churning machines, the Cassini spacecraft. In honor of its impending retirement, we’ve collected 52 of our favorite Cassini images for your viewing pleasure. The image above is a false color image of Saturn’s rings. The purple color indicates that those areas are dominated by particles larger than two inches, while green shows areas where particles are less than two inches across.

When it comes to space travel, space itself is pretty limited. So NASA designed a new solar array called ROSA, which stands for roll-out solar array. The device works just like the name implies, spreading out its panels in a fashion similar to fruit flavored sugar treats we all loved as kids. Its designers think this method could help make spacecrafts more compact, which would cut down on costs.

This tiny jumping amphibian has nothing to hide, except that it’s managed to hide from us all until recently. Researchers announced this week that they discovered this new species of glass frog, now called Hyalinobatrachium yaku. Its coolest feature? A completely transparent underbelly.

LIGO has a reputation to uphold, and it keeps living up to it.The advanced laser detector outdid itself last year by making the first direct observations of black holes, proving of the existence of gravitational waves, and affirming Einstein’s theory of general relativity. This past week scientists announced that LIGO has detected its third black hole merger, as depicted in an artist’s display above.

May 29th marked the 100th anniversary of the birth of the late president John F. Kennedy. When he came into office, the newly formed NASA space program was just getting underway, and he started with one big challenge: To land humans on the moon by the end of the decade. It turned out pretty well.