A Toxin That Takes From The Rich and Gives A Pore

Back in 1902 when pathogenic microbiology was still gaining a foothold in medicine, a researcher at the famed Pasteur Institute,... 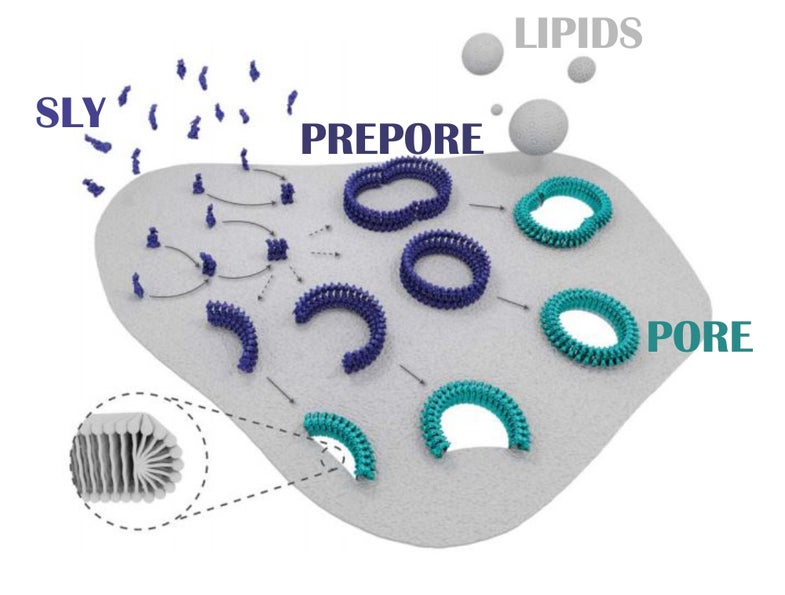 Back in 1902 when pathogenic microbiology was still gaining a foothold in medicine, a researcher at the famed Pasteur Institute, Dr. Alexander Marmorerk, came across a rather strange phenomenon. A certain group of bloodborne pathogens, known as the Streptococci, were capable of forming a toxin that for some reason killed cells by punching holes into the membrane and releasing the cellular contents into the environment. He could crudely isolate the toxin but as to its molecular nature, only time and further research would tell.

For decades, the toxin, eventually called a cytolysin, became a focus of medical microbiology as it seemed to be common to a number of bacterial gram positive pathogens. Each cytolysin was given a different name based on the microbial species. As such, these factors became known as streptolysin, pneumolysin, perfringolysin, listeriolysin, and botulinolysin. By the turn of the millennium, there were over a dozen different toxin types isolated and studied at the molecular level.

The analysis of these cytolysins provided a more in-depth understanding of their action. Though they were known to form holes in the membranes of victimized cells, the mechanism was far more complex. The toxins were first expressed as single protein entities known as monomers. When they came into contact with one of the richest lipids in a membrane, cholesterol, they would attach to the molecule and then begin to arrange a larger complex, known as an oligomer. These larger entities would enter the membrane forming a pore. At this point, the cell would be unable to keep its contents inside the cell. The subsequent leakage of vital cytoplasm would inevitably signal its doom..

The understanding of pore formation led to a more explicit classification for these toxins, termed cholesterol-dependent cytolysins, or CDCs. The information also led researchers to explore further into how exactly these virulence factors worked such that they could be prevented in the future. Over the coming years, the results led to an expansion of the knowledge such that the entire biochemical pathway could be understood.

Based on the evidence, pore formation is a two-step process. First, the monomers come into contact with a cholesterol molecule on the surface of the membrane. At this point, one of the monomers changes its three-dimensional structure, allowing for interaction with another monomer. When attachment occurs, the same conformation change happens with the new addition. The process continues until a conga-line-like oligomer called a prepore is formed.

Once a sufficient number of monomers have attached such that the line can form a circle, the oligomerization ends and the complex enters the membrane forming the pore. At this point, the cell is all but doomed. In some cases, such as the intracellular pathogen Listeria monocytogenes, listeriolysin O allows for the immediate engulfing of bacteria into intracellular vesicles, where it can live and reproduce. In other instances, including the pathogenic streptococci studied by Marmorek, the introduction of a pore signals red blood cells to start their own death. This programmed necrosis offers the bacteria even more nutrients and enables even faster growth. In the context of sepsis, pore formation speeds up the clock and reveals why sepsis by this bacterium is so rapid and devastating.

While the mechanism has been understood for the most part, in terms of developing possible treatments, there continues to be a missing piece of the puzzle. Though infinitesimal in nature, knowing what happens the actual moment when the oligomer enters the membrane is critical. If it is simply dropped into place, it could be prevented by strengthening the membrane or providing some type of blocking agent. If the process is gradual in which the oligomer gently enters the membrane, there may be other possible routes to halt the process before it forms the pore.

This past week, a United Kingdom and Australian collaboration provided the first glimpse at the mechanism of membrane entry and offered perspective on how this could potentially be prevented. They focused on suilysin, which comes from the porcine pathogen, Streptococcus suis and examined the toxin at the atomic level. What they found was a fantastic journey from monomer to oligomer to pore.

Once monomers were placed in the presence of a cholesterol-containing membrane, as expected, prepores began to form. But unlike what they expected – a uniform compilation of rings – the results revealed a wide diversity of arc shapes as well as rings, all attached to the membrane. A closer inspection revealed the oligomers were formed based on the density of the monomers in place in relation to the area of the membrane present. Also, the chains were far more flexible than expected, moving gracefully in the environment. Only a hinge motif allowed for the catch and grab of monomers into the conga line structure.

But while these were small surprises, the real treat came in the visualization of pore formation. As expected, the pore formed after the oligomer formed a complete circle. But, rather than simply push its way into place, the toxin actually changed its conformation, literally collapsing into the membrane. The process only took a few minutes and happened without any significant alteration of any nearby membrane structures. As for the cholesterol lipids, they were displaced and sent into the environment.

From a microbiological perspective, revealing the nature of CDC pore formation is a great step forward as it allows for better understanding of how these potent toxins work. However, in the public health context, the almost perfect execution suggests finding a means to prevent and/or alter the process may be difficult if not impossible. The presence of a hinge region may offer some hope for a target as well as the nature of the collapse into the membrane. Yet at the moment, these are still theories to be explored. For now, the best way to prevent pore formation is quite simply to avoid contact with these bacteria. This means adhering to proper hygiene in the public arena and infection prevention guidelines in health care.