Tiniest Chameleons Have The Most Powerful Tongues 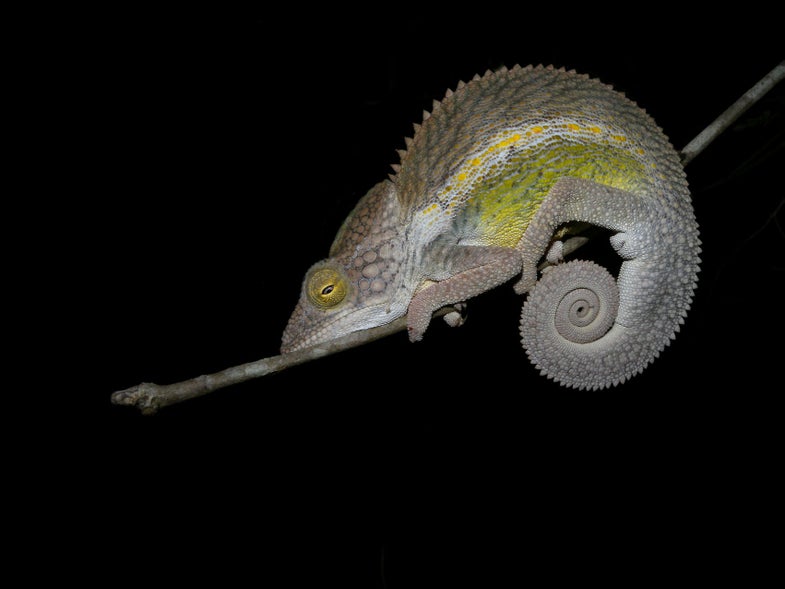 Bigger isn’t always better. In a study published this week in Scientific Reports, Christopher Anderson, a biologist at Brown University found that the smallest chameleons had the most powerful tongues.

Usually, when people think of chameleons they think of their extraordinary ability to change color, a skill that they get from crystal-like structures in their skin.

But they also have pretty incredible tongues, capable of snagging their dinner from a distance.

Anderson looked at 20 species of chameleon, luring each to display their skills in front of a high speed camera with a tasty cricket. Using the footage, he was able to determine how fast each chameleon’s tongue accelerated out of its mouth.

The fastest tongue of the 20 chameleons examined by Anderson belonged to the tiny Rhampholeon spinosus which could fling its tongue out at its prey at stunning accelerations. Its fastest acceleration that researchers recorded was 2.59 meters per second per second, which allowed it to reach speeds of about 11 miles per hour in a fraction of a second–that’s the equivalent of a car going from zero to 60 miles per hour in roughly 0.01 of a second.

Researchers found that this chameleon, Rhampholeon spinosus, can stick out its tongue with a peak acceleration 264 times greater than the acceleration due to gravity (9.8 m/s-2-).
Animals