Or at least something close 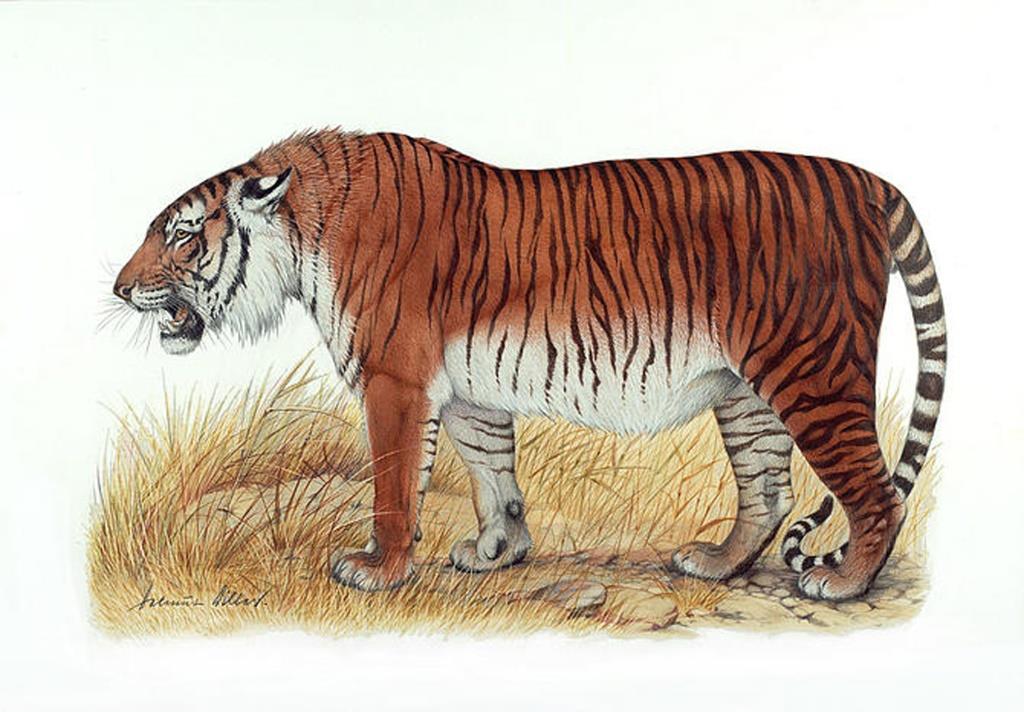 Caspian tigers once roamed all over Central Asia, ranging from modern day Turkey to northwestern China. The huge cats stalked through tall reeds and shrubbery, hunting boar and deer. But in the first half of the 1900s, hunting and poisoning decimated the subspecies, and the Soviet Union’s agriculture projects drained the tiger’s swampy terrain to grow cotton and other crops. Disappearing habitats and food sources had wiped the Caspian tiger off the map by the 1950s.

But Central Asia may yet get its tigers back. Scientists at the World Wildlife Fund (WWF) and the International Union for Conservation of Nature (IUCN) want to reintroduce tigers to a remote area of Kazakhstan.

It’s too late to save the Caspian tiger (unless we de-extinct them using genetic engineering), but the Siberian tiger, a close relative, might be able to fill the ecological hole it left behind.

“We think it’s a good idea to restore this legendary animal to the habitats where it lived only 50 or 60 years ago,” says Mikhail Paltsyn, a doctoral candidate at the State University of New York’s College of Environmental Science and Forestry. Paltsyn is a member of the WWF and IUCN, and he was recently commissioned to study the restoration program.

Two factors bolster the case for the tiger’s reintroduction. First, the collapse of the Soviet Union saw some of its agricultural programs abandoned, and natural habitats restored. Second, in 2009, scientists discovered that the Siberian tiger is a close relative of the extinct Caspian. A good portion of the Caspian tiger’s DNA lives on in the Siberian subspecies, which might make it a suitable replacement for the extinct cat.

For now, the idea of transplanting tigers from Russia to Kazakhstan is not a plan that’s set in stone, but the Kazakh government has shown great interest. “The odds are really high” that the project will happen, says Paltsyn.

Kazakhstan has been thinking about bringing its tigers back for a decade or so. Now, in a study in Biological Conservation, Paltsyn and his colleagues have pinpointed the locations where reintroduced tigers are most likely to thrive.

The Caspian tiger’s range was large but patchy. They lived in wetlands near rivers, separated by deserts and steppes. Analyzing the tiger’s former territories, the researchers found that most of it can no longer support much of a tiger population. The big cats need large swaths of reed thickets and riverine forests called tugay to wander through, with few humans nearby and large numbers of boar and deer to hunt.

In the end, one area stood out as the best site for tiger reintroduction: the Ili River delta in southeastern Kazakhstan, and its neighboring Balkhash Lake. The area is expected to become part of a nature reserve within the next few years. It supports some 7,000 square kilometers of tugay and reed thickets along the river, whereas people and livestock are pretty sparse.

It goes without saying that Siberian tigers are not Caspian tigers. They’re accustomed to prowling around Russia’s broadleaf and conifer forests rather than the reed thickets of Kazakhstan. However, the two disparate locales share similar prey species and climates, although there’s less snow in Kazakhstan. “It’s a little bit of an unusual habitat for the Siberian tiger,” admits Paltsyn. “But there’s a lot of cover in the reed thickets, and scientists hope they’ll successfully hunt for prey.”

However, populations of boar and deer are low in the proposed region—at the moment, they would only support around eight tigers. The researchers think that if they tend the prey populations for 15 to 20 years, and then slowly introduce about 40 tigers in groups of five, the region could eventually support up to 200 tigers—after a century or so.

A few hundred tigers may not seem like a lot, but it’s quite a crowd for this dwindling subspecies.

There are only about 500 Siberian tigers left in the wild, so the group of 40 to 55 individuals that would be transplanted to the foreign environs of Kazakhstan is significant.

John Goodrich is the senior Tiger Program director at the wildcat conservation group Panthera, and he’s not part of the Kazakhstan reintroduction program. He thinks that if the program imports about five orphaned cubs from Siberia per year, as is the current plan, “this should have no ill effect on the existing wild population of Amur [Siberian] tigers.”

“Orphaned cubs are taken into captivity almost every year in the Russian Far East,” says Goodrich, “and it has been demonstrated that these cubs can be raised in captivity and successfully released back into the wild.”

And it’s possible the project will even help the Siberian tiger. “If we established a new population of tigers in Central Asia,” Paltsyn says, “it could serve as a reserve population.” Deforestation and developments such as roads, railways, and power transmission lines pose problems for Russia’s tigers. The tigers in Kazakhstan could be insulated from any disasters that might strike in Russia.

Big cats have proved themselves to be remarkably adaptable. In 2002, five South China tigers were moved from Shanghai to a South African sheep farm, where they’ve grown to a population of 20. Meanwhile, some West Texas mountain lions are flourishing in Florida, and Canadian lynx are living it up in Colorado.

“We are pretty optimistic that if we bring tigers into the Ili-Balkhash area, they can easily adapt to the new conditions,” says Paltsyn. “But of course they should be carefully monitored, and if the population starts to decline, maybe it’s not a good idea.”

If they do end up moving to Kazakhstan, the tigers will face three main threats.

First, the government will need to get wildfires under control. Local residents burn down the riverside tugay forests and thickets to create grazing land for their sheep and cattle. This loss of habitat is the main reason for the low numbers of deer and boar (a.k.a. tiger food) in the area.

Poaching is another problem. Locals hunt the deer and boar that the tigers will need to survive—sometimes for meat, and sometimes for pleasure. “Hunting is traditional,” says Paltsyn, “and it’s not strictly controlled right now.” What’s worse, Kazakhstan already has a problem with snow leopard poaching. Without rigorous anti-poaching efforts, says Goodrich, the restored tiger populations could get hunted out. “It will take a very strong commitment and significant resources applied to law enforcement to avoid this risk,” he says.

Getting the locals to cooperate could be a challenge, but Paltsyn is hopeful. The upcoming Ili-Balkhash Nature Reserve is expected to have 100 inspectors to patrol its lands and to shut down any harmful activities.

Perhaps the biggest challenge will be making sure the region gets enough water for the tigers and their prey to thrive. Before the Ili River reaches Kazakhstan, it flows through Xinjiang, China, where water consumption is growing. Between 1995 and 2003, Paltsyn’s study notes, the area of irrigated lands increased by 364 percent. That means less water downstream, and if water consumption continues to grow, it could spell disaster for the tiger restoration. And that’s not even taking into account climate change, which is expected to make the region drier. The tiger restoration project’s success hinges on whether China can be persuaded to curb its consumption.

The good news, says Goodrich, is that “a tiger reintroduction plan may provide the impetus both governments need to take the measures required to protect one of the last wild tugay systems.”

What about the locals?

Few people live near the potential tiger refuge, and their numbers are shrinking. Basic infrastructure like schools and hospitals are limited, and the land isn’t great for livestock grazing, so a lot of people are getting out. Some of those who remain will no doubt resist efforts to curb wildfires and poaching.

“Local people are of course very concerned,” Igor Chestin, the head of the WWF’s Russian branch, wrote in an email. “[F]inding a way to accommodate needs of local people and tigers is a key for the success of the program.”

The Kazakh government is hoping the tiger refuge would help the local economy. They’re expecting to make money off of tourists who’ll come to see the tigers, and the project could open up new business opportunities for locals to become tour guides, restaurant owners, and shopkeepers.

Fortunately, says Chestin, there’s plenty of time to figure out these social and political issues. Long before tigers can be reintroduced, the habitat and deer and boar populations need to be restored—a process which could take 15 or 20 years. “This gives enough time to prove that restored natural ecosystem is more worthy for locals than degraded pasture,” he says.

The long road to recovery

The tiger’s recovery in Kazakhstan will take a big step forward this year or next with the creation of the Ili-Balkhash Nature Reserve. After that, it comes down to hammering out deals between Kazakhstan, Russia’s WWF, and China. Paltsyn says the project should also be reviewed and approved by the IUCN Cat Specialist Group and other wild cat experts.

Meanwhile, Chestin is confident the program will find funding, including about $5 million and $2 million USD per year from Kazakhstan and the WWF, respectively.

After the money and politics are ironed out, the restoration of prey species could potentially start as early as 2018, says Chestin.

If the project gets the official go-ahead and the prey restoration goes well, the legendary striped cats may once again roam the reed thickets of Kazakhstan by 2033.