Tick-borne illnesses have tripled in the last 14 years. Here’s how to explore the outdoors safely. 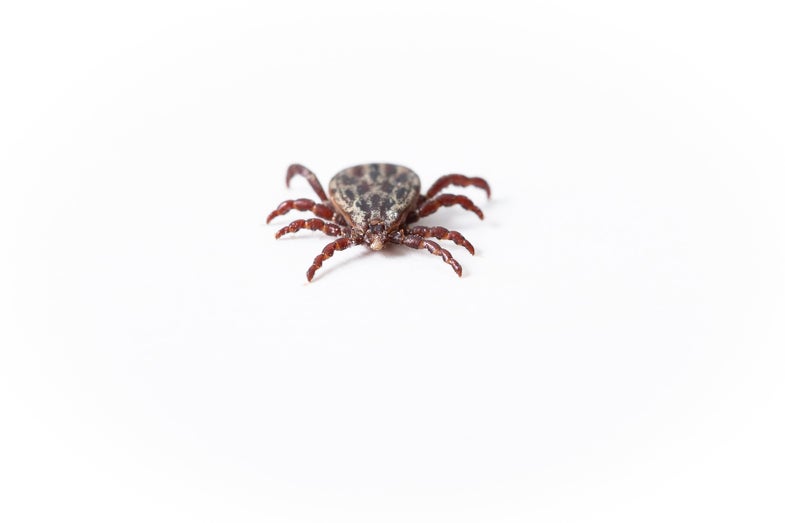 We have a growing tick problem, and I don’t just mean the physical engorgement of a blood-filled arthropod attached to your scalp. No, this swelling is of the numerical variety. Cases of tick-, mosquito-, and flea-borne diseases have tripled since 2004, according to a recent report from the Centers for Disease Control (CDC), and the upward trend shows no signs of stopping. More than 60 percent of the annual cases are caused by ticks, with lyme disease being the most common tick-borne illness.

Part of the problem is that increasingly warm temperatures have broadened the region where ticks can live, exposing more people who may not be used to fending off the little buggers. “Where there are ticks, there comes the disease,” explained Lyle Peterson, director of the CDC’s Division of Vector-Borne Diseases in a press call. “It also increases the length of tick season, causing people to be at risk for longer periods of time.”

So with more people living in tick-laden areas—and a summer full of outdoor fun coming up—we all need to educate ourselves on how to avoid the tiny beasts. Unlike mosquitoes, you often don’t know when there’s a tick on you until it’s swelled up so much with your own blood that you see its gray lump of a body. Here’s how to stay unbitten:

Not all insect repellent sprays work well on ticks. The CDC recommends using one for your skin with at least 20 percent DEET, or one with picaridin or IR3535 as the active ingredient. Some people have concerns about DEET’s effect on human health, and if you personally have a sensitivity to it you should opt for a picaridin-based repellent. But multiple studies (and meta analyses of those studies) have concluded that DEET is generally safe for humans, though you should still wash it off once it’s no longer needed. Even the Environmental Working Group, a historically chemophobic organization, recommends it when you need a highly effective insect repellent.

For yard frollicking, that’s probably enough, but if you’re heading out into the woods for a long hike you might want to consider treating your clothes as well. Sprays containing 0.5 percent permethrin can go on anything fabric-based, including tents, and last through several rounds of washing—so you don’t have to treat your gear every time you hit the trail.

Avoid thick brush, or at least suit up!

That extra layer of protection is extra important if you’re going into thickets where you’ll be brushing against plants. Ticks sometimes drop down from trees onto unsuspecting hosts, but they also hang out on leaf tips with their bitty arms outstretched, waiting for someone to walk by. When someone or something does, they latch on.

Permethrin-treated clothes can help, but the best protection is simply more fabric. Long pants tucked into boots, shirts with long sleeves, and brimmed hats can all help prevent ticks from digging their mouthpieces into your flesh. It might not sound very appealing on a hot day, but even thin, light layers can help.

If you happen to know your plants well, you can also try to avoid areas with Japanese barberry, Amur honeysuckle, and multiflora rose—they all tend to harbor ticks.

Don’t forget about the dog

You can’t exactly tell your pup not to crash through the bramble on your walk, so make sure to protect them from tick bites in other ways. Some heartworm and flea medications—the kind that you administer as a pill every month—also contain tick protection. These are mostly designed to prevent true infestation, not individual bites, so you shouldn’t leave it at that. A few companies sell collars infused with a repellant that lasts for several months so you don’t have to spray every time you let the dogs out.

Check yourself and others when you come back inside

Ticks don’t latch on right away, especially if they’ve landed on your clothes and are hoping to find a patch of bare skin. They’re also tiny—the CDC helpfully reminded everyone that they’re about poppy seed-sized a few weeks ago—so do a thorough inspection when you get back indoors. Wearing light-colored clothes helps to increase contrast. Also remember to check your scalp, especially if you weren’t wearing a hat.

And remember to check your dogs, too. Pets with thicker coats will fend off ticks easier, but guard hairs aren’t impenetrable—and it’s much easier to spot a tick crawling on top of fur than wriggling around inside it. A few minutes spent examining you and your pup could prevent you both from getting lyme disease. Plus, your dog will love the attention. Kids will love it less, but it’s important to thoroughly check them as well.

If you find a tick that’s already attached, grab small tweezers or a pair of forceps (like tweezers, but with a locking mechanism) and pull that sucker off. The less time it has to suck your blood, the less likely you are to get a tick-borne disease.