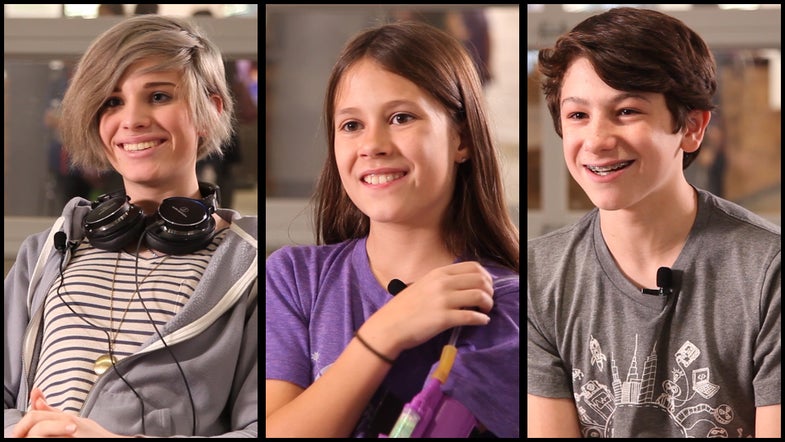 Here at Popular Science, we love DIY projects and kid inventors. So we’re always on the look out for young people who are literally building a better world for the rest of us.

Most recently, Popular Science met three creators—11-year-old Jordan Reeves, 15-year-old Jakob Sperry, and 17-year-old Alexis Lewis—at a showcase hosted by Autodesk, a manufacturer of 3D design software. Each of these young inventors had a different reason for designing printable projects, but they all shared the same goal: to inspire and help others, and to change the world. 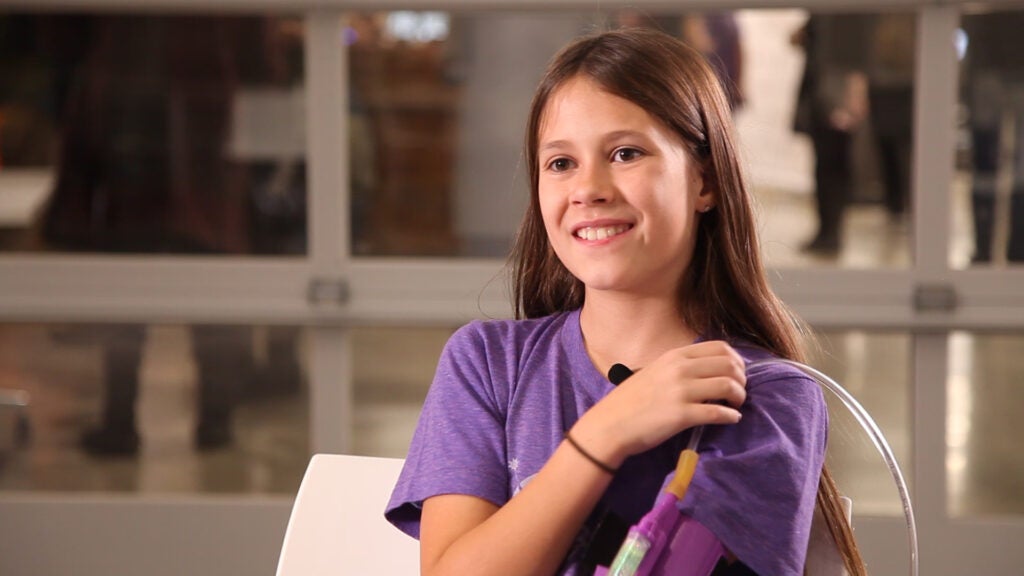 Jordan Reeves was born with a left arm that stops just above the elbow. The 11-year-old has used prosthetic arms for most of her life, which makes her particularly well-suited to design them. And in March 2016, at a camp co-hosted by Autodesk and Bay Area nonprofit KidMob, that’s exactly what she did. Her “Project Unicorn” is a 3D-printed arm that shoots five cylinders’ worth of glitter.

Why glitter? To show that the designing and printing process is accessible to young inventors. “Creating and building stuff is fun,” Reeves says. “Kids will make the future better if they start designing…The smallest things can make a big impact.”

After the camp, Jordan was “teamed up with this cool guy named Sam” Hobish, a designer at Autodesk. The two have regular chat sessions over Google Hangouts, during which they created a new version of Project Unicorn. This updated arm contains a nozzle and a single canister of glitter, which is attached to a can of compressed air via a rubber hose. When Jordan squeezes the trigger, glitter goes flying. 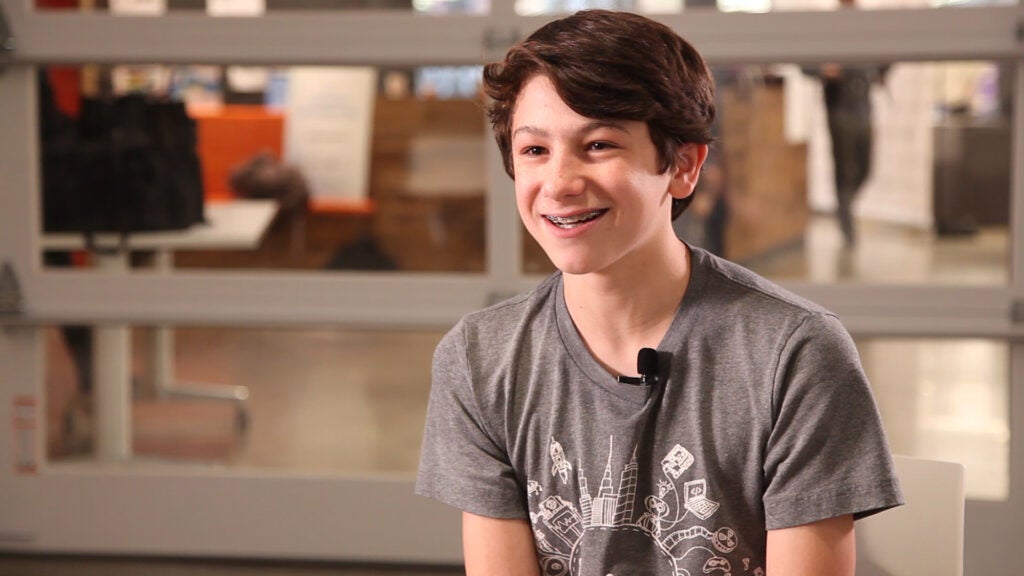 Jakob has spent his whole life building things with his hands. Even before he became interested in 3D printing, the 15-year-old whipped up designs using CAD (computer-aided design) and practiced a more traditional craft: woodworking. “One of my earliest projects that really helped me along the way was making my workbench in my garage out of two-by-fours and plywood,” he says. “That’s been instrumental in helping me to create all of my other projects.”

Jakob’s father, who works in product development, has access to a 3D printer at work. Jakob fell in love with the technology immediately, using a modeling program to craft designs at home. He’d email the plans to his father, and receive the printed versions the next day when his dad came home from work.

The project that landed him at this showcase, though, was a fidget toy for people (like Jakob himself) who struggle with ADHD. The devices provided by his teachers were lackluster, so he decided to make his own. “It just amazed me that I could do something on the computer and then have it in my hand,” he says. “And it solved a real problem.”

While browsing Thingiverse—a site where 3D designers can upload their files for others to download, modify, and print—Sperry found a design of two interlocking rings. “I thought to myself, ‘I can make that into a fidget toy. Just make the center part spherical, and create rings around it that spin around each other and interlock.'” The result is Gyrings, five concentric rings around a ball. (It’s available for sale, too.)

Sperry’s friends became test subjects, playing with early iterations of Gyrings in school. These preliminary models came came in several sizes, ranging from one to three inches in diameter, but had sharper corners on the insides of the rings. “I knew I could improve the design, because it kind of hurt when you used it,” Sperry admits. “Everyone else had a similar reaction. They were like, ‘Whoa, this is cool! It sucks, and you can make it a lot better, but this is cool.”

Since improving the design, Sperry has sold over 1,000 Gyrings through his website and in retail stores in Boston. He just signed a licensing deal with Ceaco: Gyrings will be part of its Brainwright brand of toys, which means they’ll soon be available in Target, Barnes and Noble, and Wegmans. 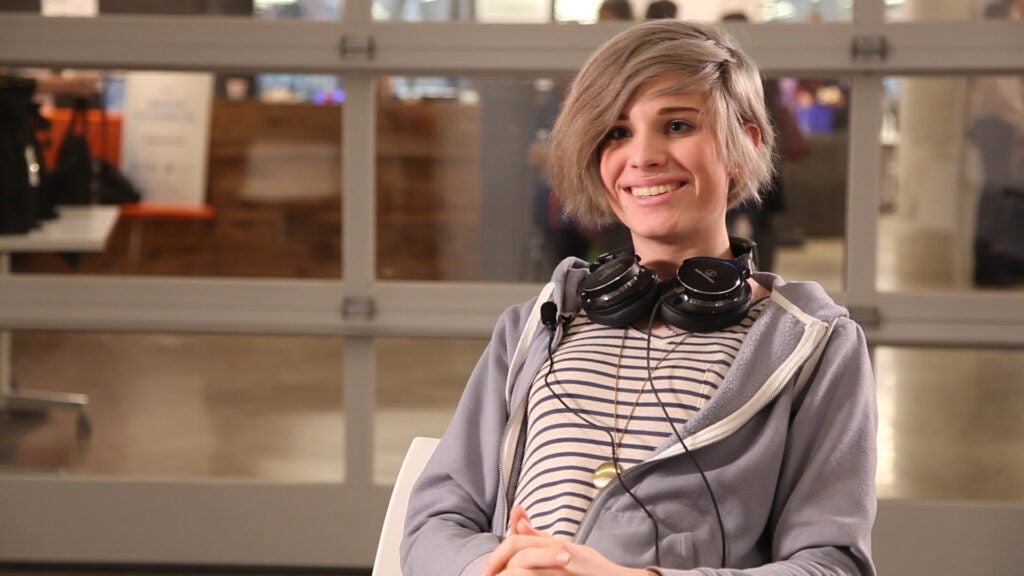 You could say that high-stakes problem-solving is in 17-year-old Alexis Lewis’ blood. Her grandfather was a rocket scientist for the Apollo programs, and Lewis describes his love of science as “infectious.” She says, “Seeing the world through that lens—that everything is definable through a set of equations—was probably the most defining factor in my interest in science and the world as a whole.”

In the summer of 2013, Alexis read a story about a mother who had to drop her two-year-old from the second story of a burning building to save the child from dying of smoke inhalation. Surely, Alexis thought, there had to be a better way, some sort of device that could protect the lungs of someone trapped in a fire until they were rescued. Turns out there is—it’s called the Emergency Mask.

The problem, Lewis discovered, is getting that mask to those who need it. No matter how quickly first responders (EMTs, police, and volunteer firefighters in civilian vehicles) arrive on the scene, they’re not equipped to safely run into a burning building. So there’s little that they can do before firefighters with protective equipment arrive. Faced with this obstacle, Lewis began thinking about ways to deliver an Emergency Mask to someone trapped on the second story of a burning building.

She started by looking at projectile launchers, such as pneumatic launchers and potato cannons. To test these methods, she turned to sports mascots, who often shoot t-shirts and towels into the crowd. When she had them aim at a target with pneumatic launchers, their accuracy was “literally 0 percent,” she says. But when a mascot threw the object instead of shooting it, it landed accurately nearly half of the time. Lewis then began designing and 3D printing hand projectiles, which she tested with firefighters. 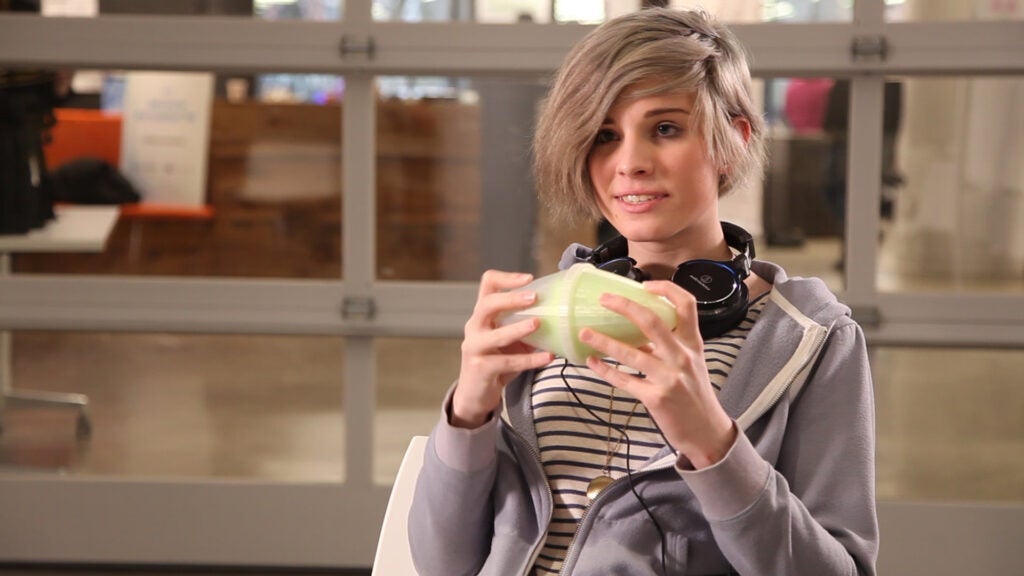 Lewis holding the Emergency Mask Pod in its current form

The current iteration of her work is the Emergency Mask Pod, a plastic, football-shaped case that can hold Xcaper’s Emergency Mask, plus act as additional protection to keep smoke out of users’ eyes. The package also includes a glow stick, which makes the user more visible in a smoky room. Lewis claims that it can be thrown into an open second-story window with 70 percent accuracy from a close, but safe, distance.

Correction: This article originally stated that Autodesk is currently a manufacturer of 3D printers. Although Autodesk did manufacture the Ember 3D printer, it is no longer doing so, and thus currently does not make 3D printing hardware. Popular Science apologizes for the error.