Speak softly and simultaneously deploy a bunch of bombers 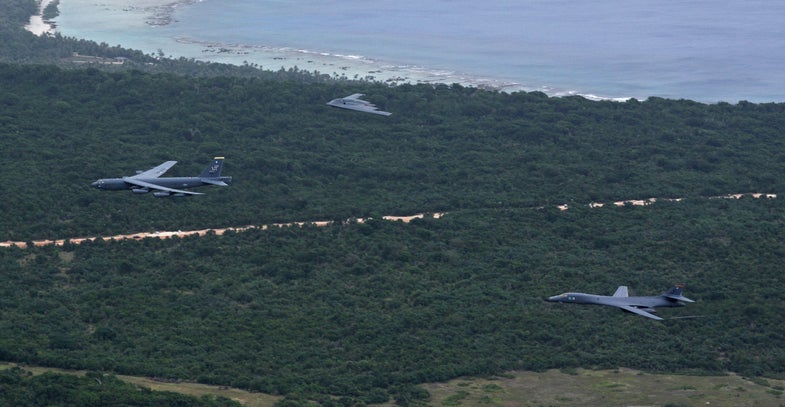 A U.S. Air Force B-52 Stratofortress, B-1 Lancer and B-2 Spirit fly over Guam after launching from Andersen Air Force Base, Guam, for an integrated bomber operation Aug.17, 2016. This mission marks the first time in history that all three of Air Force Global Strike Command's strategic bomber aircraft are simultaneously conducting integrated operations in the U.S. Pacific Command area of operations. As of Aug. 15, the B-1 Lancer will be temporarily deployed to Guam in support of U.S. Pacific Command's Continuous Bomber Presence mission. (U.S. Air Force photo by Senior Airman Joshua Smoot). Senior Airman Joshua Smoot
SHARE

There are just three siblings left in the American family of bombers. There’s venerable Boomer B-52, which first flew when Truman was in office and entered service before Ike had finished his first term. Generation X gets the B-1, a fast and powerful craft designed to fly under the radar. And then there’s the millennial of the group, the too-advanced-for-its-time stealth B-2 spirit, a technological marvel with a production run cut short by the end of the Cold War. This week, for the first time ever, all three bombers had a family reunion of sorts at Andersen Air Force Base in Guam.

What were they all doing there? Mostly training, but also the complicated work of “strategic power projection,” as the Air Force puts it. How do they do that, and what does it mean? First, all the bombers together flew over the base and then on separate missions over the South China Sea and parts of Northeast Asia.

Here’s how the Air Force describes the mission:

The United States views its role as sole superpower in the world as tasked with maintaining the existing order, and as part of that America’s military operates in various spheres across the globe. Area-wise, the largest is Pacific Command, or USPACOM, and the greater subtext of American action in the Pacific is easier to see in light of China. There’s been a gradual increase in tensions in the region, and in the disputed South China Sea the People’s Republic of China has built islands, and put weapons on those islands.

There’s a lot of analysis elsewhere about what all these actions in the South China Sea really mean. For now, it means that the only way to get a bomber family reunion in the Pacific is if they can all fly together as a show of force.