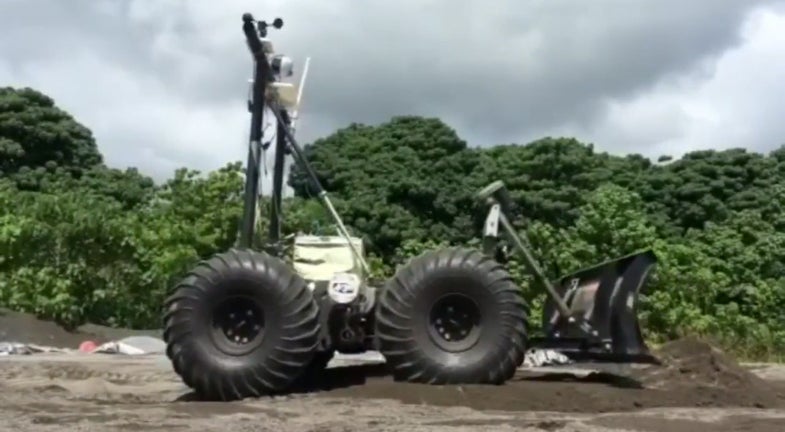 Humans have never built another structure on another planet. So far, everything hurled beyond our atmosphere and into the great beyond was constructed on Earth, made by human hands or human-built machines using resources from sweet mother Terra herself. If we want to venture forth into the cosmos, and say, launch a return rocket home, it’d be nice to have a launch pad in place on the alien planet. Instead of hauling a launch pad there, why not make a machine that can use local materials to build one?

Over the course of several months, a remotely-controlled robot from the Pacific International Space Center for Exploration (PISCES) did just that. And now, thanks to Project Manager Rodrigo Romo we can watch that construction in all its impressive, tedious glory.

While the video was released on Tuesday, the project ended in October. Here’s how PISCES described the goal:

This was part of NASA’s larger Additive Construction with Mobile Emplacement (ACME) project, which wants to use found materials on alien worlds, builder robots like this one, and 3D printing, to build structures without needing to bring all the parts from Earth. So if a robot can flatten and smooth a tract of the Big Island into a serviceable landing pad on Earth, then cover it in durable interlocking tiles, it’s likely a robot on Mars or elsewhere could do the same for a future mission. Good news for space exploration, even better news for getting space explorers home.

Watch it in action below, and see if you can catch the drone in the control room at 3:28. I promise it’s at least as thrilling as watching dirt move: