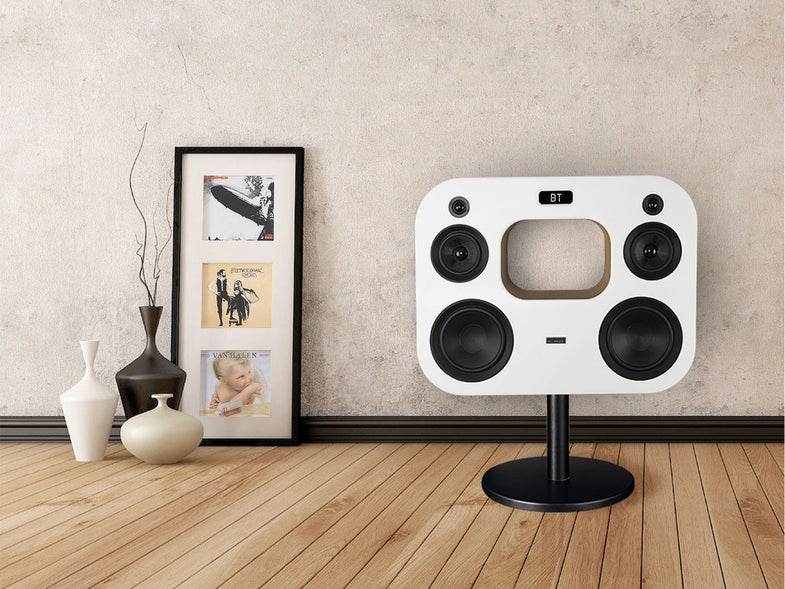 If you’re a music connoisseur that cares about sound quality, you probably haven’t given Bluetooth much consideration. Bluetooth speakers were big and bulky when they first came out, and while they’ve shrunken in size immensely over the years, that achieved portability has left something to be desired in sound quality. But before you give up on them entirely, you may want to consider the Fi70 Bluetooth speakers made by Fluance.

The Canadian company, known for producing high fidelity home audio and theater equipment, would appear not to have gotten the memo about small-sized Bluetooth speakers. The Fi70 is an extremely heavy single Bluetooth speaker, weighing in at 81 pounds. It’s so massive that it comes with a floor stand, meant to keep it in one place for good. But who needs to move a Bluetooth speaker from room to room when it can fill several rooms from one location? And that’s where the selling point comes in: This all-in-one system—for a surprising $500 a piece—delivers incredible power.

Dual 9-inch woofers deliver big sound compared to both those shrimpy portables and mini-boombox Bluetooth numbers. While smaller portables try to fill a room with about 30 watts, Fluance is delivering 280, which is more than many sound bars on the current market.

The result of that extra power isn’t just loudness. The speaker filled a multi-room apartment with sound that didn’t become tinny and hollow around corners or at 10 yards out—and the sound was rich and vivid. The low tones had depth and weren’t overdriven, and the mid and tweeter outputs were well balanced. With the Fi70, you hear individual instruments again, and not just a few guitar solos here and there over drums and bass.

You’re probably wondering about the weird hole in the middle. I was too. It turns out that it’s actually a simplified design: The left and right sides are responsible for holding the two speaker stacks, the bottom handles the drivers and all the hardware, and the interface and controls are located at the top. Nothing needed to go in the middle, so nothing did. Simple. Weird looking, but simple.

And that weird feature actually ended up being surprisingly useful. I used it as a phone shelf as the Fi70 also has a standard headphone jack input. It also has inputs if you want to use it as a sound bar, or with any number of standard, wired, audio inputs, as well as a USB charging input and an AM/FM radio signal receiver.

That means it’s more than the sum of a radio, sound bar, Bluetooth speaker, and a charging station.

It’s not quite a home theater system though, and it’s important to be clear that the sound is not built for surround, movie watching, or enhancing your TV. But it could do all of those things fine—perhaps with better quality than your TV can deliver on its own. The biggest limitation is unfortunately the shape and size: Because of the tall, blocky shape, you’d have to use it as a TV stand in order to center the sound without obscuring it. That works, sort of, for smaller TVs, but the unit is not deep or wide enough for most standard TV stands these days, and after you crank the sound up, do you really want to watch your TV shiver with every heavy bass action scene?

That’s why figuring out a name and a place for this thing was so difficult. Bluetooth speaker doesn’t feel appropriate or complimentary. Stereo calls to mind a dozen individual components, and boombox is a term that half the people who would buy this unit probably never heard (like Walkman, or Hi-Fi).

It could be called a sound bar with Bluetooth, but it’s so much more. And yet so much less. At $500 this is an affordable alternative to so many elaborate and inferior sound options.

So at least in this case, we’ll stop talking about what it is, and instead just suggest you find a place for it, and listen.