A long time ago in a mushroom kingdom far, far away 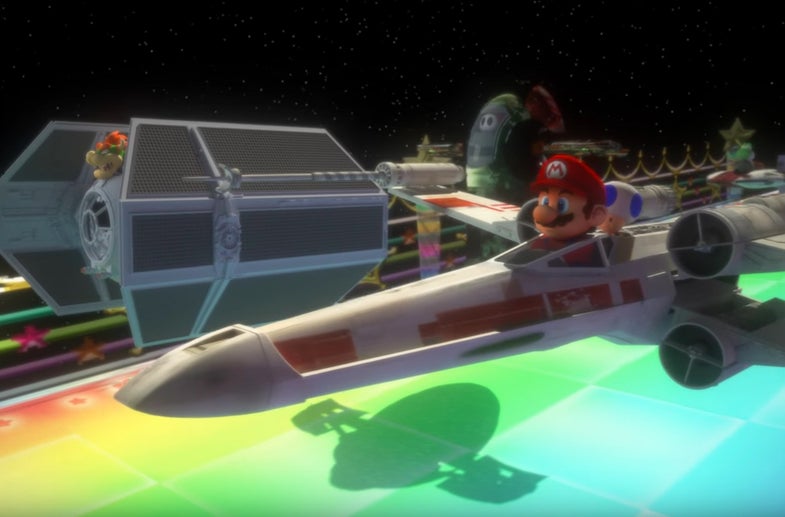 Few games are more fun than Mario Kart, the Nintendo item-filled cart racer. And few franchises capture our imagination about space travel like Star Wars does. Now we don’t have to enjoy one without the other.

YouTube user Dark Pixel has assembled a mashup between the two popular franchises to bring us Star Kart. The footage shows Mario, Bowser, Yoshi and others traveling through hyperspace, flying across Tatooine, and encountering the Death Star. All while gathering coins, of course. Seeing is believing so you can watch the video below.

Nintendo is no stranger to adding downloadable content (DLC) to its games nowadays. Most recently, the company brought two new characters to its Super Smash Bros series. Corrin and Bayonetta mark the final two fighters to be added to the game–one of them being voted on by fans. We streamed gameplay of the new additions and found them to be quite formidable, if not a little NSFW. The latest Mario Kart also took part in the downloadable fun with characters from Legend Of Zelda and Animal Crossing added to the race track.

On the Star Wars side, games like Battlefront have also seen their fair share of DLC. Most recently, the Battle Of Jakku download added to Battlefront allows players to fight on Rey’s home planet (unless, you know, it isn’t). With both properties being open to adding extra content to the game, we could very well see Mario content in a Star Wars title or vice versa.