This June Was The Hottest June Ever On Record

This June has been swelteringly hot across the United States, but we’re not alone in feeling the heat.

According to new data released by NOAA on Tuesday, June was the hottest June on record since record-keeping started in 1880, with average temperatures 1.62 degrees Fahrenheit above the 20th century average.

This news marks the 14th consecutive month that the monthly average temperatures have broken records, putting 2016 on track to be the hottest year since 2015, which broke the record set by 2014 by a huge 0.23 degrees Fahrenheit. 2016’s year to date has been the hottest 6 month period on record.

Both North America and Africa experienced the hottest June on record for their continents since 1910. In the Arctic, researchers saw the lowest level of sea ice in June since records started being kept in 1979, and in the Arctic, it was the smallest extent of sea ice since 2011.

If this feels like deja vu, it may be because you’ve seen this all before. See you next month with more of the same. 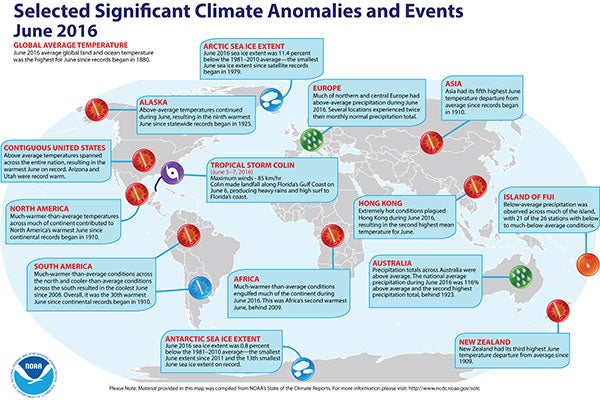