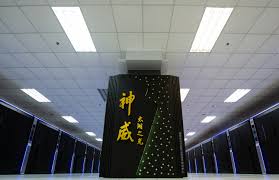 That new supercomputer is the Sunway TaihuLight, which has 10,649,600 central processing units (CPU), to achieve a processing speed of 93 petaflops; that’s 93 quadrillion calculations a second, or 2 million laptop computers. Built by the National Research Center of Parallel Computer Engineering & Technology, the Sunway Taihulgiht is operated at the National Supercomputing Center in Wuxi, China.

The Sunway TaihuLight’s 40,960 Shenwei SW26010 computing modules each contain 260 1.45Ghz CPU, which are all entirely designed and made in China. In contrast, the Tianhe 2 used Intel Xeon Phi cores for its processors (the ShenWei can thank a bit of its success to a US government ban on further Xeon core sales to China that was supposed to halt Chinese supercomputing).

Supercomputing is key part of the Chinese government;s plan shift to an innovation driven society. China hopes to finish an “exascale”1000 petaflop supercomputer in 2020, China already has the world’s largest installed supercomputing capacity at 211 petaflops out of a global installed capacity of 566.7 petaflops. China also has 167 of the world’s 500 fastest supercomputers, according to the globally recognized TOP500 list. Besides the direct application of the technology, the innovations, experience, and engineering capabilities used to design and build supercomputers are likely to be applied to other areas of Chinese electronics, including in the consumer, industrial, scientific, and military sectors.

New Chinese Supercomputer Goes Beta (Ahead of Schedule and on Budget)